Update on April 25, 2021: The cause of Anana's death has been announced. She died of heart failure. The wounds on her head were probably from Nuka trying to move her around the area, maybe nudge her back to life.

Today is a very sad day. Our beloved Anana, age 20, was killed today, Monday, February 8, 2021, by 16 year old Nuka in the Detroit Zoo.  They had lived together last year in peace, and had just been reunited last week when Anana emerged after denning up.

The male, Nuka, has been with several females over the years, without incident. The other female polar bear at the zoo, Suka, gave birth to twins in November and is behind the scenes.

Anana was born December 12, 2000 in Hogle Zoo in Salt Lake City to Chinook and Andy. She went to the Buffalo Zoo when she was two, and lived there until 2013, shortly after she gave birth to Luna, who still lives in Buffalo. Luna's father was the late wildborn Nanuq. Anana took no interest in the cub, so Luna was raised by keepers. Anana moved almost immediately to Chicago.

Anana stayed for several years in Brookfield Zoo in Chicago, where she lived with old Aussie, and with his son Hudson. Then she returned to Buffalo for a year after the Buffalo Zoo completed construction of a beautiful new and spacious polar bear habitat, to replace the antiquated bear pits Anana knew before.

She spent several years in the Cincinnati Zoo, where she initially rejected Little One, but then changed her mind and they got along well, although no cubs resulted.

While she was in Cincinnati, I went to see her quite a bit, and she was a real favorite with zoo visitors. She was petite, just about 450 pounds, and very round and fluffy, with a cute pouty lower lip. She was playful and fun, and loved to pose for the visitors.

She brought out the best in Little One. He was active and playful again, in spite of his advanced years. They seemed to really enjoy each others' company, once Anana got over her original reluctance.

Anana would take awhile to warm up to a new male companion. In Buffalo, she didn't want Nanuq at first, but after a year, she decided she liked him after all, and the result was Luna. The same thing happened in Cincinnati. She and Little One would huff and puff at each other, and avoid getting close for the longest time, and then all of a sudden, she couldn't get enough of him.

Maybe that is what happened in Detroit, but Nuka was impatient and didn't want to play her games. We don't know what happened and maybe never will.

A year ago she moved from Cincinnati to Detroit, and it was hoped that she might have another cub with Nuka.

It is rare for polar bear mating to to lead to a death, but it does sometimes happen with these predators. A similar tragedy happened in Russia last spring, A polar bear named Aurora moved from the Royev Ruchey Zoo in Krasnoyarsk to Izhevsk Zoo in March. She was introduced to the male Baloo, all seemed to be going well. Then Baloo attacked suddenly and killed Aurora, on April 29, 2020.

Anana's sudden tragic death comes as a great shock to me. I knew her so well, and she had a big personality in such a tiny bear body. And now she is gone. I was hoping to see her again this spring when I go to Detroit to see Suka's cubs. I miss her already.

Besides her daughter Luna, she also had twin brothers, Kiska and Koluk, who live in Arizona, and a brother, Denali, who lives in Sapporo Japan. 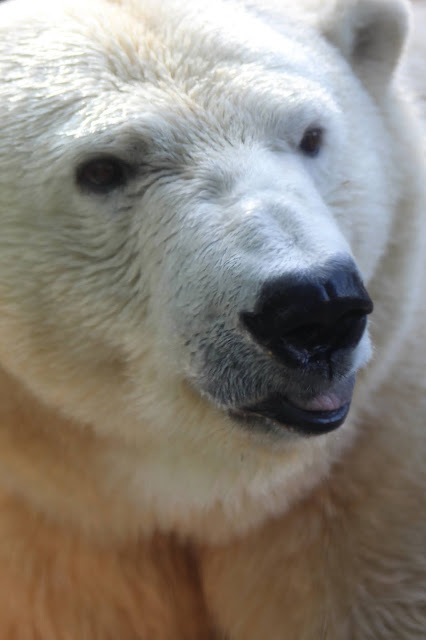