These pictures are from last year. I visited the Toledo Zoo in May of 2010 to meet Siku, the only polar bear cub in a U.S. Zoo last year. He was five months old when I visited. I'm sure he's much bigger now, and I plan to visit him again in July. No cubs born in U.S. Zoos survived this year, but there is a little girl cub in the Alaska Zoo, who is moving to the Louisville Zoo next week! She was born wild, but found abandoned. Her name is Qannik, and I will visit her as soon as she makes her public debut in Louisville.
The Arctic Encounter is right around the corner from the ticket gate. Because of all the attention given to the only polar bear zoo cub to survive that season in the entire country, the Toledo Zoo had arranged a viewing system. You stand in line for awhile, then groups of about 30-40 are ushered into a building, when a zoo employee shows a video, and gives information about Siku and his mother Crystal. Father Marty and another female Nan were out back, not on view. Siku weighed about 55 pounds, right on target for his age. He was born Dec. 3, 2009. Crystal had twin girls, Aurora and Anana, now age 5 and thriving in the Columbus Zoo (see previous postings). 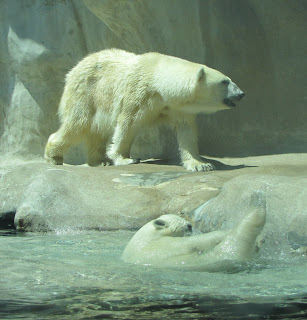 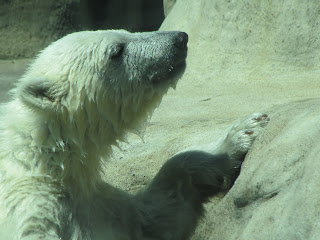 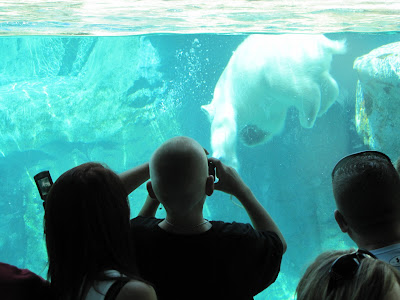 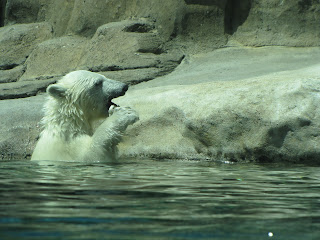 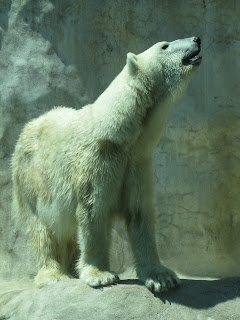 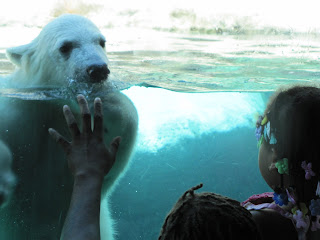 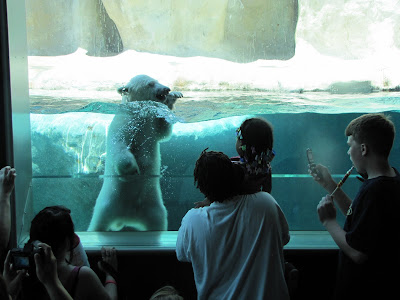 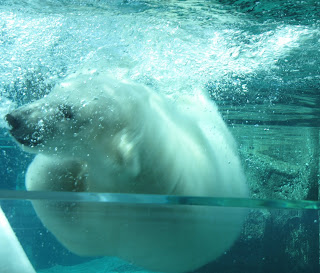 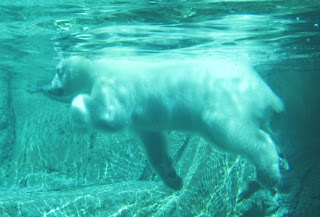 Siku had had his lunch and both mom and son were napping. The internal view enclosure was very high, you had to stand on a ledge to see them. He was cute napping; Crystal was sleeping too.
After a 4-5 minute talk, my group was allowed to go to the viewing area – and we were allowed 4-5 minutes to view the bears. Then we were supposed to leave. I had driven a long way from Cincinnati to see this little bear, and I wanted to see him in action. So I lingered. And lingered. Several groups had come and gone, and still I lingered.
Crystal woke up and moved around a little. Finally, Siku woke up, and ran out to the swimming area. This little cubbie had so much energy. He loved swimming, and he loved playing with the children who lined up at the window. He took turns between diving and schmoozing the kids at the window. The children were fascinated with him.
Crystal mostly paced back and forth while Siku swam and played.
Siku decided to swim to the outside area and play with the big balls and the huge floaty float. Then he came back and played with the kids some more.
Siku liked to sit in the shallow part of the pool and chew on his foot. He was fascinated with his feet at that age! Sometimes he would jump out of the pool and chase his mom, biting at her hind feet.
Crystal looked really good. Her fur was smooth and full, and she seemed to be pretty happy. Probably exhausted though, with Siku to look after. Mostly, she let him run and swim, and just kept watch.
It is a great place for a young bear to play. He had a little mountain to climb, a variety of pools, and some floaty toys. He seemed to want to play with the kids, though.
One father warned his child that the bear was looking at him for lunch. I knew better. Siku was looking for a playmate.
I told the zoo attendants that I was taking pictures for a worldwide polar bear consortium, so they let me stay. I tried to keep out of the way for all the people coming through.
I was impressed with the Toledo Zoo, but I didn’t like the time limit (which I ignored anyway). I suppose most families are seeing everything at the zoo, and their attention span is up in 5 minutes anyway.
I rode the African wilderness railroad, and that was fun. I wanted to spend most of my time with Siku and Crystal.
It was quite a day at the Toledo Zoo. I'm looking forward to seeing Siku as a 1 ½ year old cub next month. 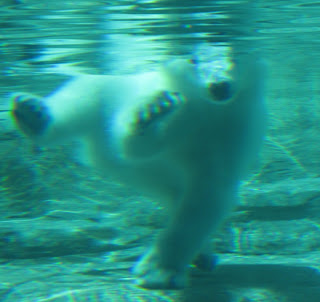 Posted by Molly Merrow at 9:22 AM No comments:

A quick visit with Neil and Buzz on May 29 at Como Zoo in St. Paul MN. Their diving pool has sprung a leak, so it is closed and drained. Neil and Buzz are now using the left side enclosure until their pool is fixed. 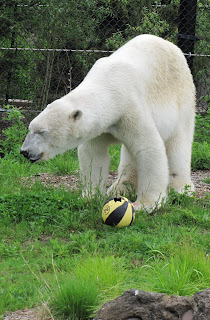 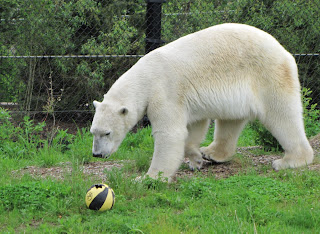 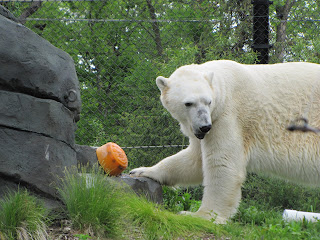 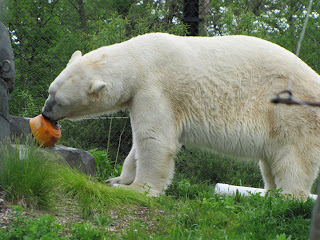 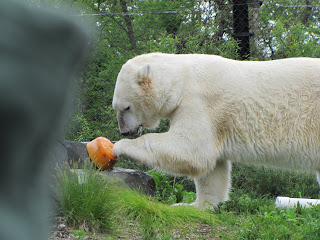 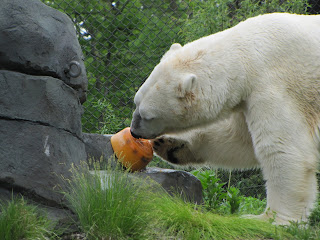 The zoo gave the boys a frozen ice bomb, and Neil went right to work. I only had about 10 minutes to see them, then I had to catch a plane. Neil and Buzz are lookin' good. And they had a big crowd to enjoy their antics.
Posted by Molly Merrow at 8:10 PM No comments: