Today, February 27, 2021, is International Polar Bear Day. It's a great time to take a look at the cubs born this past winter in zoos, since they most likely have all been announced by now. We are celebrating the arrival of nine little ones, including two sets of twins. Three of the new cubs are being raised by keepers.

Almost all the births are to first time mothers. Sesi has successfully raised one cub before, and Suka had given birth several times, but the cubs died within days. The other new moms,  Shilka, Yuki, Ewa and Kometa, now each have their first cub to raise. Seryozhka in Russia is letting the keepers do the mothering job for her twins.

In Russia, there are three polar bear cubs, including the twins being raised by keepers. One of the fathers, Aion was born in the wilderness. The mother of the twins, Seryozhka, was also a wild orphan, so these are especially welcome fresh genes.

In Japan, two zoos each welcome a cub. This is the first time in a several years since Japan has had cubs, maybe since Lira was born in 2014.

In Europe, we have one cub in Sweden and another in France.

The only cubs born in the U.S. this year are in Detroit, twins with one being raised by keepers.

Suka is taking good care of one cub, and the other, a girl, is being raised by keepers. When the cubs were a few days old, the keepers, who were watching by den-cam, noticed that one of the cubs was weaker and having trouble, so they separated the family, and swooped in to rescue the little girl. She is doing well, according to reports and photos. The gender of the other cub, still with Mother Suka, is not known.

Suka and her twin brother Sakari are offspring of Marty and Belgium-born Crystal of the Toledo Zoo. Suka is from the dominant polar bear family in U.S. zoos.

Nuka and his twin brother Koda were born in the Denver Zoo. Their parents were Voda and Kavek. Nuka's genes are rare. He is one of only three male bears alive who have produced cubs in the U.S. zoos, the other two being Suka's father Marty, and Lee.

Suka had given birth the past two years, but the cubs did not live more than a few days. This time, both cubs are doing great. 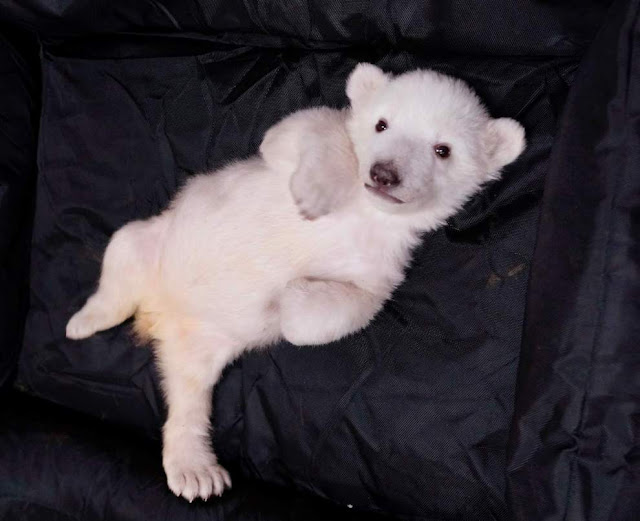 Here's Suka's daughter, who is being raised by keepers. Photo by Detroit Zoological Society

A daughter was born November 22, 2020, to 10 year old Sesi and  10 year old Vicks in Mulhouse France. It was announced this week that her name is Kara.

Vicks and Sesi are already parents of a 4 year old daughter Nanuq, who now lives in Munich. Sesi's great grandmother CW was born in Memphis Tennessee. Vick's grandfather Omaha was born at the Henry Doorly Zoo in Nebraska.

November 25, Tennoji Zoo in Osaka, twins were born, with one surviving. Parents are 16 year old Gogo and 7 year old Shilka (Icchan). This is Shilka's first cub. Gogo is the father of six year old Momo (Peach), now in Hamamatsu, Japan.

Shilka was born in Novosibirsk, Russia, the daughter of Gerda and Krassin. Gerda is the daughter of famous Moscow couple Simona and Vrangel. Their other children include Flocke's mother Vera, as well as Milana, Zefirka, Wolodja, and Nord.

Gogo was born in Perm, to parents Anderma and Yukon.

In late November, twins were born in Gelendzhik Safari Park in Russia, and are being raised by four keepers, all women. The father is 18 year old Commander Sedov, son of Uslada and Menshikov of St. Petersburg. These are his first cubs. The mother is 7 year old Seryozhka (Seleska), who was an orphaned cub herself.

Seleska gave birth outside the den, then went back inside, abandoning the newborns and showing no interest in taking care of them. The keepers took over, and cared for the twins, a girl and a boy. The twins were introduced to the public this week, as the keepers supervised their play inside a glass enclosure, with the cubs' parents looking in from one direction, and the adoring public from the other side. 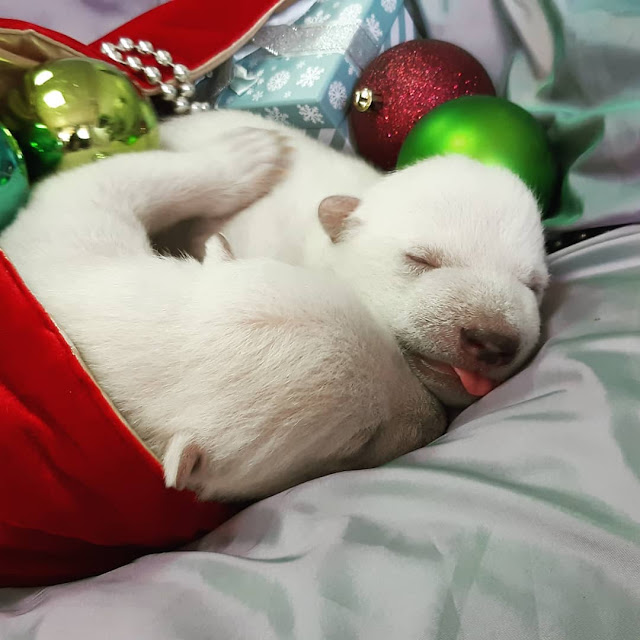 The twins in a holiday pose - photo by Gelendzhik Safari Park

Ewa is one of Huggies and Victor's triplets, born in 2005 in Ouwehands Zoo in the Netherlands. The other two triplets are Henk, who has fathered three sets of twins in Nuenen, the Netherlands, and Jelle, who is the father of two cubs in St. Felicien in Canada, with two different mothers.

Wilbär is the only cub from the union of the famous couple from Stuttgart, Germany: Anton and Corinna.

Yuki was born in Palic, Serbia, to father Bjorn-Heinrich and Mother Simba. Bjorn-Heinrich's parents were Aika and Gorki of Tierpark Berlin, which makes Yuki's father the brother of Eric (father of all of Olinka's cubs, and also Felix, father of Flocke, Gregor and Aleut, Charlotte, and Milak).

Gota is the son of famous Moscow polar bear parents Murma and Untai, which makes him the brother of Rasputin, Kap, Boris/Ivan, Tonja and others.

8 year old Kometa and 11 year old Aion became parents on December 27, 2020 at Rostov-on-Don in Russia. It is a first cub for both of them.

Aion was born in the wilderness on the Chukchi Sea, found as a young cub near the village of Aion and taken to the Moscow Zoo.

Kometa and her twin brother Nanuq were born in Zoo Brno in the Czech Republic to parents Cora and Umka. Nanuq is in  Ukraine and has a daughter. Kometa's mother Cora is daughter of Uslada and Menshikov of St. Petersburg.