Nord is gone too soon

Nord was almost 16 years old when he died today in Ranua Zoo in Finland. He had been ill for awhile, and was being treated, but we don't know what the problem was. He was euthanized when it became clear he was beyond help.


Young Kulu, at 725 pounds and nearly two years old, is ready to move on. The Columbus Zoo recently announced that the cub will be transferred to another zoo. Which zoo is a mystery, although they did say that it will be in the Midwest.
A friend who is visiting the Columbus Zoo this weekend reports that Kulu has already left. The zoo posted a farewell video featuring special enrichment for the bears on its facebook page on Wednesday, October 6.

Up until a few days ago, Kulu lived with his mother Aurora and her twin sister Anana. His father Lee is currently in Louisville KY. Moving Kulu now will allow the zoo to bring back Lee or maybe another male before the spring breeding season. Lee is the son of the late Aurora who was born in Salt Lake City and the late Yukon, who was born in the Cincinnati Zoo.

Kulu was born November 28, 2019. He spent the first months in the den with his mother, and by the time he was ready to come out into the public eye, the Pandemic had closed all the zoos. I finally got to see Kulu for the first time in June of 2020.

Earlier this year, the zoo introduced Kulu's Aunt Anana into the mix, and the three bears got along very well.

I visited the Columbus bears last week, and found Aurora and Kulu playing wildly in the water with their toys. Anana was napping. It was hard to tell the bears apart, as they are so close in size.  Aurora still has the telltale signs of being a nursing mother on her chest, and a faint brown paint dab on her left paw.

Kulu and his mother would fight over the toys, making a game of it. Aurora really liked playing with the flat fire hose, making it snake around in the water.  She played with the orange traffic cone as well. Now she will only have to share the toys with her sister.

I descended the steps to the underwater viewing, and it was quite spectacular, with the mother and son wrestling in front of our eyes. 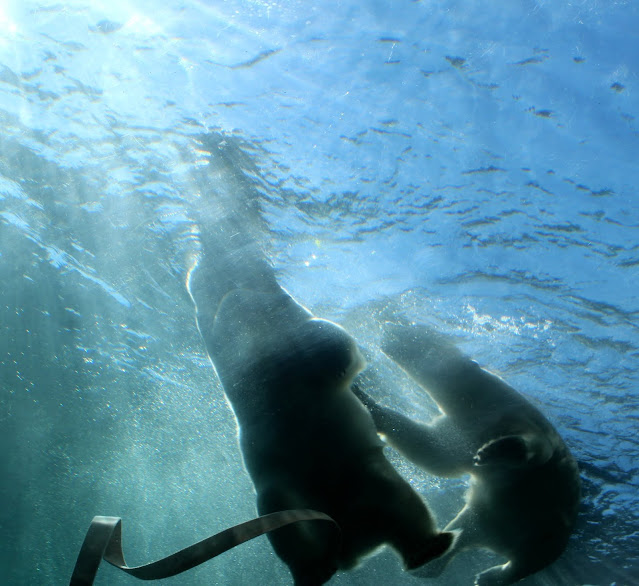 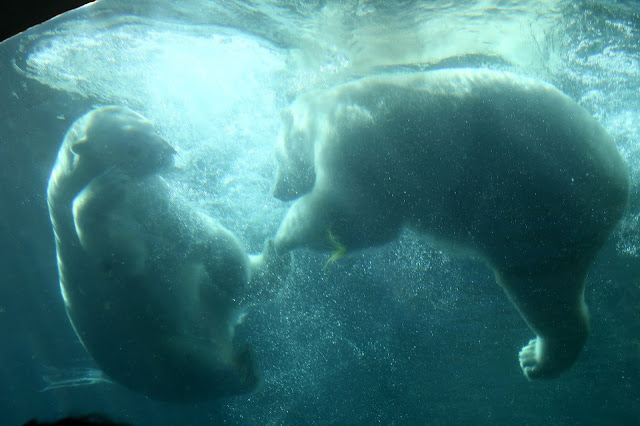 When Kulu and Aurora were tired of playing in the water, they wandered over to where Anana was sleeping, giving her a greeting as each went by.

Mother and son strolled back to the shore of the big pool, and curled up for a nap, Aurora playing for a bit with a yellow floatie.

Anana walked past her dozing sister and nephew to the dock area, and just sat quietly there, posing for the visitors.


I suspect Aurora and Anana will miss Kulu, but it was reported that the twin sisters were having a good time playing together in the water over the weekend. Now they won't have to share their toys with a youngster.

Maybe Kulu's new home will be a zoo not far from me, so I can visit.

While bringing father Lee back from Louisville may have been the plan, I don't know how the uncertainty of the AZA accreditation of the Columbus Zoo will affect that. The zoo has appealed the AZA ruling to rescind their accreditation. While Columbus is a world class zoo with an excellent polar bear habitat, the threatened loss of accreditation comes about because of financial improprieties by executives who are no longer there, and allegations about possible involvement of the former director in questionable dealings with wild animal traders. Since these situations are in the past, have been properly addressed, and seem to have been resolved, the zoo is appealing the AZA action of taking away their accreditation.

Posted by Molly Merrow at 10:32 AM No comments:


Snow Lilly's many friends and fans are in mourning the loss of this very special older bear. She was known for her basketball skills, juggling a bright ball above water, and dribbling a ball on the floor of her pool. She was quite  advanced in years, the oldest polar bear in North America, second in age only to Katjuscha of the Berlin Zoo by just a few weeks, but she had kept up her activities, and seemed to be living her best life, right up to the end.

Snow Lilly has finished her last ball game. She died on Friday, September 24.

Her mate was the late Blizzard, brother of the late Little One of the Cincinnati Zoo. In 1991 Snow Lilly gave birth to a boy cub, Tundra, in the Bronx Zoo. Tundra died in 2017, after living his whole life in the Bronx Zoo.

Snow Lilly moved from New York to the Milwaukee County Zoo in 2005, where she lived with Zero, who had been born there in 1989, and then with rescued circus bear Wilhelm. I visited in 2013, and first saw Snow Lilly on her own during the morning.  She went in, and Wilhelm appeared for the afternoon shift. Snow Lilly wanted to have her own space, so the bears took turns.

Snow Lilly was a bear who knew how to have fun, especially with a ball. Her keepers gave her lavish birthday parties with special treats, her favorite was crab legs, and she delighted in opening her presents.

Snow Lilly had many fans, and will be greatly missed. There are now no polar bears in the Milwaukee County Zoo. The end of an era.