Patches of the Erie Zoo

The Erie Zoo in Erie Pennsylvania is home to Patches, a sweet-natured 24 year old lady bear.

She looks great except that in recent weeks, she has been bothered by biting flies, and she has scratched several itchy spots raw by rubbing on the walls. Then they itch some more, and she rubs on the walls some more, and the sores open up. The zoo is treating the sores, but it is hard to keep the ointment on when she swims and rubs against the rocks.


Her pool is small, but the water is very clean, as is her enclosure. When I was there, a zookeeper was hosing down Patches' area from above, and Patches didn't mind getting sprayed. I was told that Patches gets enrichment activities in the afternoon. There were no toys in sight, but there is a dry moat in the front of the enclosure, so that limits what the keepers can put into the area. There is a nice resting area above the pool, and Patches seems to like that spot. There is also some sort of stone slide going down to the pool, but I can't imagine a bear using it.

If she gets too hot, she can get into the pool, or retreat to her air-conditioned quarters.

The Erie Zoo had just lost Alcor, one of twin brothers, and only Mizar, age 9, was left. Alcor had broken his leg in August, 2006, and had surgery, but died shortly afterwards. It was hoped that Mizar and Patches could have a family. Unhappily, Mizar died a few months later of a ruptured spleen.

Later that year, Norton arrived on loan from the Detroit Zoo. The people at the Detroit Zoo doted on Norton, and hated to see him go. Patches did become pregnant, and in the winter of 2009, Patches gave birth to a stillborn cub. Norton, at age 23, died in early September, 2010, from a hernia, a tear in the abdominal wall. He had been there two years. The Erie Zoo had hoped that Patches would give birth last winter, but that just didn't happen.

It is so hard to find a zoo polar bear in the United States, so Patches, twice a widow, may be alone for some time.

Zero at the Seneca Park Zoo 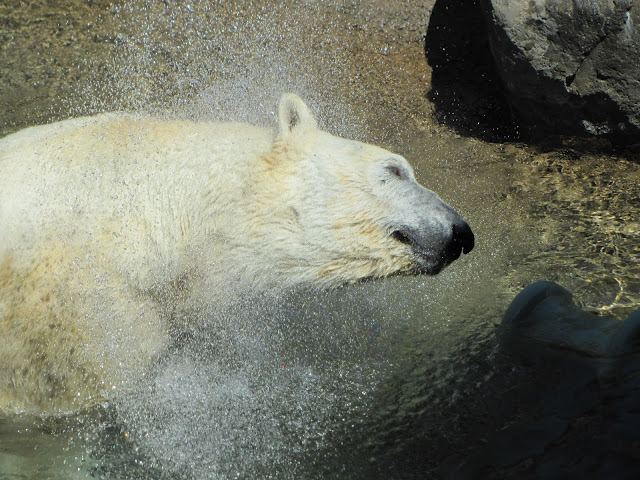 My July 1, 2011, visit to the Seneca Park Zoo in Rochester, New York, started off slowly, since Aurora was nowhere in sight, and Zero was napping. The Rocky Coasts enclosure is all rock, with some nice vistas above, and a great underwater viewing below, but the long walk down to the underwater area goes past views that are blocked by rocks, trees, and bushes, and it was hard to find a good place to see the napping Zero. I would recommend that some of that greenery be cleared, so people can see Zero and Aurora better.
The water was crystal clear, but Zero wasn't swimming. He was sleeping, stirring occasionally to bat at a pesky fly. C'mon Zero, wake up. The doors to the bears' indoor rooms were open, so the bears were free to come and go. Aurora preferred to be in the cool indoor area that morning, apparently. 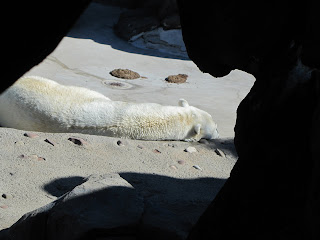 The bears have a great swimming area, and a gorgeous waterfall. The water is crystal clear. 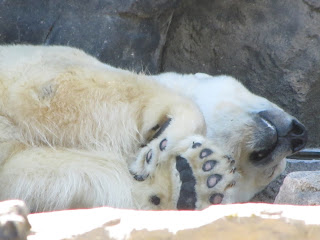 After two hours, Zero awoke when a friendly zookeeper threw in a big chunk of ice and his favorite big blue barrel to play with. Aurora made a brief appearance, then disappeared back inside before I could get my camera turned on. She looked great, but no pictures that day.
Zero had great fun with the floating ice, and his barrel, sometimes balancing the barrel, and other times hugging it as he floated along. A zoo employee told me that they do have plenty of toys. Zero is very playful and has a big personality. 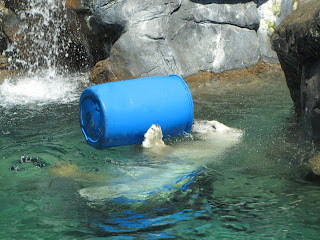 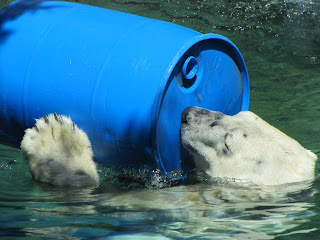 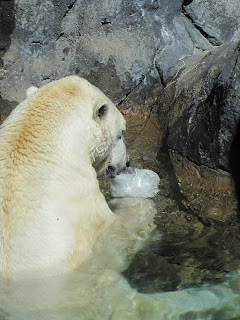 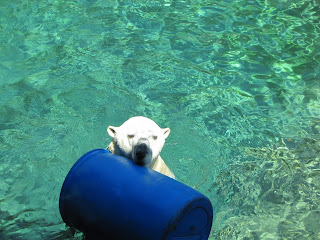 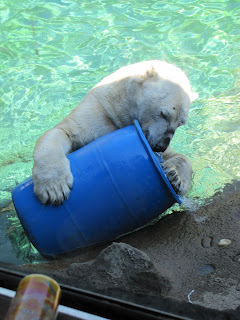 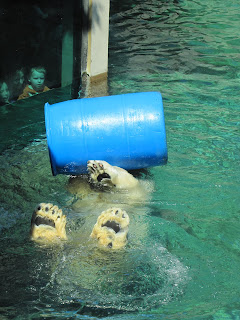 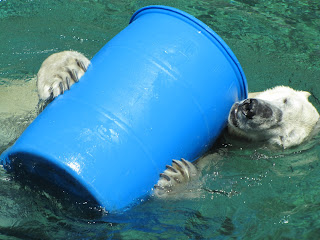 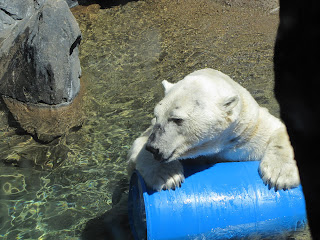 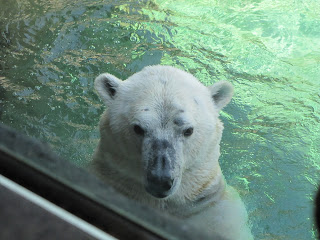 Zero, who was born in the Milwaukee Zoo on December 14, 1989, gained worldwide fame for his adventure when, while playing with a toy, he fell into a safety net in an 18 foot deep moat in his enclosure in the Milwaukee County Zoo in October of 2008. He stayed down in the moat for 18 days this time, and garnered worldwide attention, as many sent in suggestions as to how to lure him out of the moat. There were daily news stories on Zero and his status. Zero had done the same thing some years earlier, when he took a week to climb the stairs out of the moat.
This time, even though the Milwaukee zookeepers had given him half rations of food in the hopes of luring him out because of hunger, Zero showed no interest in leaving the moat, the zookeepers finally had to anesthetize him and lift him out with a crane. After 18 days.
Zero, who was named Zero because of the outside temperature on the day he was born, moved to the Seneca Park Zoo in January of 2010, after four years of living with Snow Lily in Milwaukee and producing no cubs. Snow Lily had kind of given Zero the cold shoulder, and there was really no romance there. It was hoped that Aurora in the Seneca Park Zoo would find Zero more attractive, and produce cubs. Now that they have gotten to know each other, maybe there will be cubs this winter.
Aurora was born November 6, 1989. at Utah's Hogle Zoo. In Seneca Park, she has had five cubs, a single and two sets of twins. Four of those cubs survived and have gone on to other zoos. Her previous mate, Yukon, died August 31, 2008, from pancreatitis at the age of 18. Aurora gave birth to Haley on November 15 in 2002. Haley is now at the Northwest Passage Habitat at the Memphis Zoo, where she lives with Payton, who is a year younger than Haley.
I wish I had gotten pictures of Aurora. That will have to wait for another visit.
Posted by Molly Merrow at 7:37 AM No comments: