Neil, Buzz and the Minot Bears

Buzz and Neil, 16 year old brothers at the Como Zoo in St. Paul, Minnesota, have spent most of the past year playing host to three flood refugees from the Roosevelt Park Zoo in Minot, North Dakota, Goldie the Grizzly Bear (a male), and Brown Bears Judy and Sandy (lady bears) are enjoying the run of the right-hand half the brand new polar bear habitat at the Como Zoo, until they can return home to Minot, hopefully in the next few months. A much improved new bear habitat is being built in Minot, but the perimeter fencing at the Roosevelt Park Zoo must be solid and safe before the brown bears can return.
The Roosevelt Park Zoo was under 4 feet of water for several months last spring, due to heavy rains and snow melt. Since the waters receded in July, the zoo has been working to rebuild for the 2012 season. Minot, North Dakota, about 500 miles away from St. Paul, Minnesota.
The Como Zoo also offered a temporary home to some poison dart tree frogs, still at Como, and 13 endangered African penguins, who have since moved to a new penguin habitat at the nearby Minnesota Zoo.
Some of the affected Minot hoofed animals, such as llamas and bison, were taken in by local farmers in the Minot area. Other animals moved into a roomy old furniture warehouse that was quickly retrofitted as an indoor zoo, still in use. Still other animals were sent to zoos around the country. The Tanganyika (Tan-GAHN-yee-cuh) Wildlife Park is hosting three giraffes, two lions, two tigers and two Amur leopards from the Roosevelt Park Zoo.
Neil and Buzz were themselves houseguests for two years in the fabulous polar bear habitat at the Detroit Zoo, while their new home at Como was under construction. Polar Bear Odyssey at the Como Zoo opened June 3, 2010. The brothers enjoyed the run of the place for a year, and then Goldie, Sandy and Judy arrived in June of 2011.
The three Minot bears were quarantined for a month before they came out in public, to make sure they weren't bringing in any diseases or parasites for the other bears. For most of the past year, the central training area connecting the two bear yards was closed off, but Neil and Buzz could see their visitors from the bedrooms in the living area. A few weeks ago, the polar bears were allowed back into the training area, and Buzz spent a good deal of time when I was there, pawing at the locked door, curious about the new neighbors, or as he probably calls them, the invaders.
The brown bears are living in the right hand habitat, which has the deepest pool, good for fishing, but they mostly stay out of the water. That side has been the one preferred by Neil and Buzz, until it was taken over by the visitors. Zookeeper Cindy said that Neil and Buzz will be very happy to get their favorite area back. Since they have gotten used to the left hand area, it will be interesting to see which side they prefer now.
Even though it is winter, the brown bears aren't really hibernating. They have a good food supply, so they stay active through the winter. 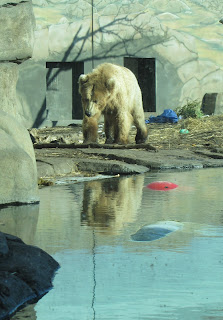 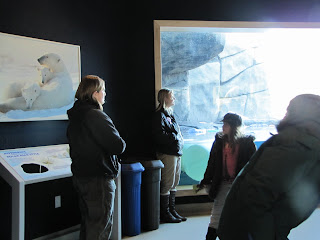 I visited the Como Zoo on February 25, two days before International Polar Bear Day, and Zoo keeper Julie Yarrington talked about her trip to Churchill, Manitoba Canada, under the auspices of Polar Bears International and the American Association of Zoo Keepers, for a week long leadership camp. She said that polar bears in the wild are very different from zoo bears in the way they act, and their attitude, and she learned a lot from her trip to the Hudson Bay area. 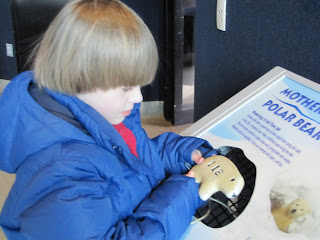 Polar Bears International worked with the Como Zoo in the design of Polar Bear Odyssey, which mimics the ecosystem of the Hudson Bay. The exhibit has many educational aspects, as well as daily zoo keeper talks. Here, Justin holds a ceramic bear showing the size (one pound) of a newborn polar bear. 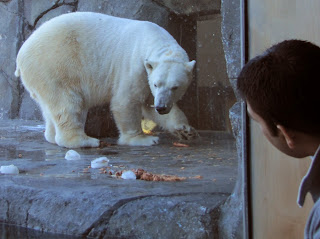