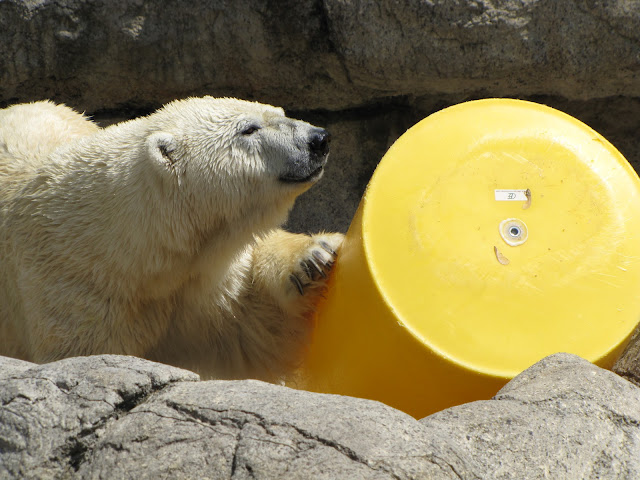 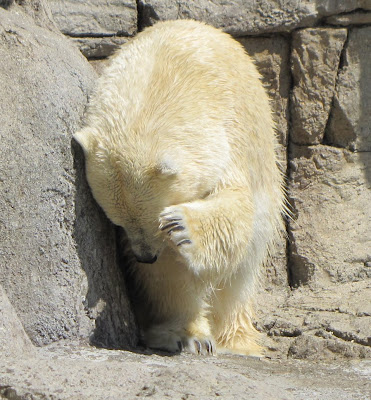 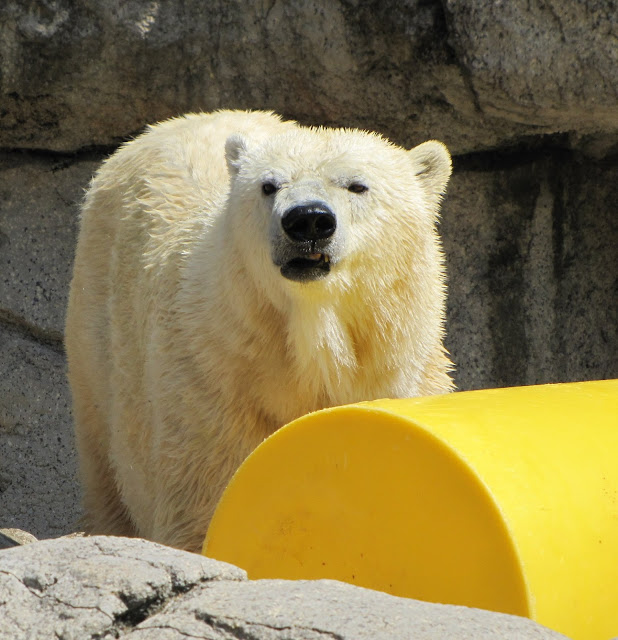 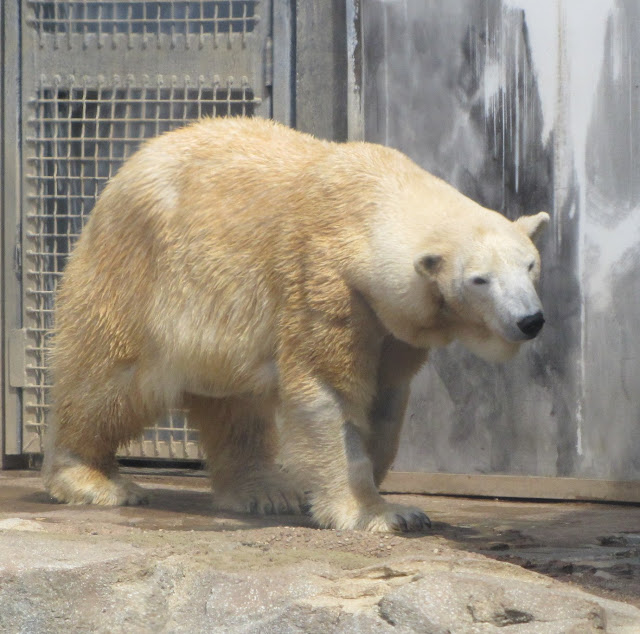 Today, in honor of Mothers Day, we celebrate one of our notable mother polar bears, the lovely dancing Arki, the 27 year old grand dame. She is the mother or grandmother of seven bears in U.S. zoos. Arki now lives in Glacier Run in the Louisville Zoo, which is a leader in creating a great bear environment.

Arki lives in Glacier Run with two polar bear cubs and the family of grizzly bears, and the zoo rotates the bears through the two outdoor environments during the day.

One of the cubs living at the Louisville Zoo is Arki's grandson Siku, who was born at the Toledo Zoo two years ago and moved to Louisville last fall.

Arki had spent most of her life at the Brookfield Zoo in Chicago, where she and her mate Aussie produce some fine polar bear cubs, three of whom are still living, include Siku's father Marty, born in 1996, who now lives at the Toledo Zoo with lady bears Nan and Crystal.

Through Marty, Arki has four grandchildren: Siku at the Louisville Zoo, five year old twin girls Aurora and Anana (with Crystal) at the Columbus Zoo, and five year old son Nikita (with Nan), now at the Kansas City Zoo.

Arki is also mother to Payton, born in 2003 and now living in the Memphis Zoo with his young lady friend Haley.

Grandma Arki is also mother of 5 year old cub Hudson, born in 2006 and still living at the Brookfield Zoo. In the year Arki gave birth to Hudson, there were only four cubs born in U.S. Zoos, and the other three were her grandchildren, Aurora, Anana and Nikita, fathered by Arki's son Marty.

Arki gave birth to a baby girl, Tiguak, born in 1999. Arki unexplainably rejected Tiguak, so the tiny cub was hand raised by zookeepers. She went to the zoo at St. Foy in Canada, where she was adored by all who knew her. Sadly, Tiguak died in April of 2011 following some routine dental surgery.

Arki was also mother of a boy, Kinapak, born in 2000, who tragically died in the Buffalo Zoo in 2007, possibly after ingesting some foreign objects that shouldn't have been in the enclosure.

Making life in Glacier Run even more interesting is the Grizzly Bear family, consisting of mama Inga and her children Otis and Rita. Inga was a “nuisance bear” who was caught going through garbage and raiding chicken coops in Polson, Montana, and had exceed the “three strikes” rule. She and her cubs would have been put down if not for the Louisville Zoo volunteering to take them in. They arrived in August of 2010, when Otis and Rita were just about 6 months old. These bears still belong to the Department of Fish and Wildlife, but now have a permanent home at the zoo. Qannik, the other polar bear cub at the zoo, also belongs to the Department of Fish and Wildlife, but she will never be returned to the wild either.
Mother Inga

The Louisville Zoo believes in making life interesting for its bears. Polar Bears and Grizzly Bears in the wild live in an ever-changing world, and this zoo is shaking things up to make life fun and unpredictable in a number of ways.

For one thing, the bears are rotated in and out of the two exhibit areas several times a day, spending some time in their bedrooms, and some time in the big pool area, and some time in the “loading dock” area. Glacier Run is designed to look like an abandoned mining town, with the interesting features often doing double duty as bear enrichment and exercise equipment.

Two years ago, it seemed that Arki had entered bear menopause, and the new Glacier Run exhibit was looking for a nice bear to live in the new state-of-the-art exhibit, so she came to Louisville, for a time as the only resident of Glacier Run.

According to one of the keepers, the Louisville Zoo has been working with Arki in many ways. For one thing, her back legs weren't very strong. When she arrived, whenever she was asked to stand, her back legs were shaky. Now, she stand up regularly on strong and sturdy back legs. For the past two years, she has been running up and down ramps and stairways that are thoughtfully built into the environment.

Beloved by the zoo staff, Grandma Arki still does her charming little pacing dance at times. Every time a bear changes locations in Glacier Run, keepers arrange for little surprises, bits of food hidden in various spots and food puzzles to solve, which is designed to cut down on the repetitive behavior. Arki is a gentle old lady, kind of set in her ways, and will always do her walking dance. Zoo staffers do daily fecal (poop) collections for each bear, to test for stress hormones, and Arki's stress hormones are the lowest, so the staff feels that she is not pacing out of stress, but out of a comforting habit. When she dances, she closes her eyes in a peaceful way, as if to say that she is happy.

Although she will always engage in the stereotypical behavior of pacing, she is also spending more time in the pool swimming than she used to. The keepers are happy with her progress. They also learned about her favorite things from the Brookfield Zoo staff, and they make sure she gets an occasional treat of of her favorite lettuce peanut butter sandwiches.


Happy Mothers Day to Arki and Inga, and to all the other bear mothers out there.