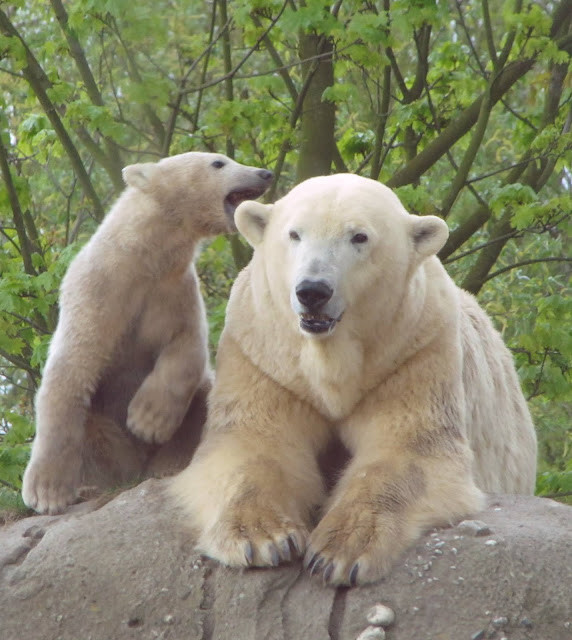 Olinka and one of her cubs

Olinka was a patient mother, and that quality served her well in raising eight cubs.

At age 28, which is fairly senior age for a lady polar bear, she was diagnosed with an advanced liver tumor, and possibly kidney involvement, while under anesthetic on Tuesday, February 9, and in light of how unwell she had been lately, it was decided to not wake her.

She had lived at Diergaarde Blijdorp in Rotterdam since 2010, where she lived with Eric, father of all her cubs, until his death in 2015.

Olinka was born November 21, 1992 in Cologne, Germany, the daughter of Olga and an American born male named Omaha.

I remember the first polar bears I ever saw, when I used to take my kids to the Henry Doorly Zoo in Omaha Nebraska, many times in 1980-83. At that time, Olaf and Olga had had a cub, named Omaha, born just after my son was born. Omaha grew up and was sent off to Europe. That cub was Olinka's father. Olinka was the only cub he fathered.

Young Olinka and her mother Olga moved to Vienna, where they met Eric. He would father two cubs with Olga, and eight with Olinka.

There in Vienna, Olinka gave birth to twins Lloyd and Nika in 2000. In 2001, Olinka's mother Olga gave birth to Felix and Nord, so to make room in Vienna, in early 2002, Nika moved to Karlsruhe, and Olinka and young Lloyd moved to Bremerhaven, where Lloyd still lives.

Then back to Vienna, where Lara was born in 2004. Both Olinka and young Lara moved to Gelsenkirchen in 2005,  where they stayed for a year. Then back to Vienna again, leaving Lara in Gelsenkirchen.  Twins Arktos and Nanuq were born in 2007 in Vienna. Then in 2010 Olinka made her final move to Rotterdam, where she gave birth to Vicks at the end of the year. In 2014, Olinka had twins Sizzel and Todz. Shortly afterwards, Eric passed away.

Seven of her eight cubs are alive and well, and have produced eight grandchildren for Olinka.

Russian male Wolodja has lived in Rotterdam for the past few years, and now is the only polar bear there.