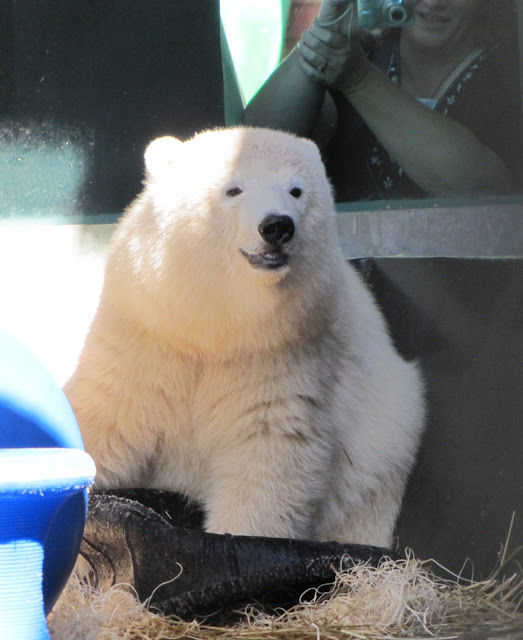 
It has been announced to the public that Anana of the Cincinnati Zoo will be moving very soon to the Detroit Zoo, to the Arctic Ring of Life. This weekend is the last chance to see her before she goes north.


In Detroit, Anana will meet up with 7 year old female Suka and 15 year old male Nuka. For the past two breeding seasons, Suka has gotten pregnant and delivered cubs, but the cubs were stillborn or lived only a day. This shows that Nuka can father cubs, in any case, so it was thought that Anana would have a good chance of having a cub if she moves to Detroit. At age 20, her biological clock is ticking. The only other male polar bears in the U.S. who have fathered cubs and are still living are Suka's father Marty, and now Lee of the Columbus Zoo, with a new cub just born.

Suka was born at the Toledo Zoo. Her twin brother Sakari is the mate of Anana's daughter Luna in Buffalo. Suka lived for a time in Madison Wisconsin, first with her brother Sakari, and then with Berit, longtime resident of the Cincinnati Zoo.

Nuka was born in Denver. His twin brother Koda is in Pittsburgh and his sister Cranbearry is in Anchorage Alaska. Nuka is the nephew of the late Rizzo, who lived at the Cincinnati Zoo for many years with Little One and Berit.

With Anana leaving Cincinnati, Little One, age 30, will be in retirement, which is rather sad, especially because he has no living relatives in the U.S., and has never fathered a cub. He does have a sister Satuki who lives in Japan, and she has never had cubs either.


Detroit Zoo's Arctic Ring of Life has two large areas that can be separated if need be, so Anana can be on her own on one side while she gets accustomed to her new place.

There is a rolling meadow so big that you can't see it all at once, only by walking along a trail to get to the other side. It has caves, a lovely pool, and wildflowers.


The Tundra area offers a large diving pool with a marvelous view tunnel for visitors, and the sea lions are right there, seeming to share the pool but in fact separated by an invisible barrier. Talini's mother Bärle taught her to hunt sea lions there at the zoo, and Talini would make a game of it. The sea lions loved to tease her. Maybe Anana will learn the seal hunt game too.

Suka's favorite game is basketball. She will spend hours tossing a ball about, diving down to get it, and balancing the ball.

Nuka is a private bear. He often stays inside, and you are lucky if he comes out to greet you. He doesn't spend much time playing in the pool.

The Detroit Zoo has a great staff of volunteer docents, and someone is always in the polar bear tunnel to tell you about the bears and answer your questions.

After Anana leaves, Little One will no doubt be more quiet. She really made him feel young and active again. He will really miss her.


Here are some memories of Anana and Little One and their time together in Cincinnati.


Farewell Anana. We will see you in Detroit! You will love it there.
Posted by Molly Merrow at 12:21 PM 2 comments:

Prosperity, the most famous White Lioness in the world, passes away

It just won't be the same. Prosperity, the most famous White Lion in the world, has died at the Cincinnati Zoo at the advanced age of 22.

My visits to the Cincinnati Zoo would usually include a stop to visit White Lion mother and daughter team Prosperity, who just turned 22 on Christmas, and her daughter Gracious, 18.  The two were inseparable. Gracious was used to following her mom around, and where you saw one, the other was always nearby.

Prosperity's caregivers had determined that conditions of her advanced age had deteriorated, and it was time for her to go.

White Lions are quite rare, and Prosperity may have been the oldest White Lion in a zoo. Their life expectancy is maybe 17 years, so Prosperity had gone far beyond that.

A plaque outside the window overlooking the White Lions' realm calls Prosperity the most famous White Lion in the world, explaining that she belonged to magicians Siegfried and Roy, and she was the official mascot of the United States Senate.

Her story began on Christmas, 1997. Tiny premature White Lion cub Prosperity was born was born into the pride at Siegfried and Roy's Las Vegas ranch, weighing little more than two pounds. Her inexperienced mother did not care for her, so she had to be handfed with an eyedropper. Roy kept her in his bed, and nurtured her. The little cub grew strong and healthy, under the care of the famous illusionists, but she was much younger than the other cats in their pride, and had  no other cubs to play with. Roy made special plans for this little one, so she could grow up in a pride. 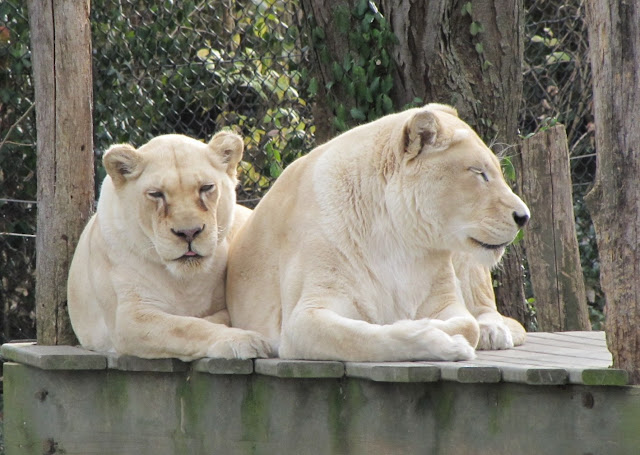 Siegfried Fischbacher and Roy Horn, German magicians known professionally as Siegfried and Roy, had a long history with the Cincinnati Zoo and with then director Ed Maruska. They had procured white tigers who had been born at the Cincinnati Zoo for their world famous act in Las Vegas.


The Las Vegas magicians soon after made a gift to the Cincinnati Zoo of two white lion brothers, Sunshine and Future, born in Germany, three months older than Prosperity. The boy cubs arrived at the Cincinnati Zoo in February of 1998, understanding only German. The keepers had to learn German commands so the cubs would understand at first.

Eight month old Prosperity was presented to the zoo personally during a visit by Siegfried and Roy on August 13, 1998, with great ceremony. Prosperity joined the two male cubs, and Roy called the trio "the Pride of the Millenium," with hopes that Prosperity would produce a new generation of White Lions of Timbavati. Prosperity weighed 120 pounds and was flown from Las Vegas by private jet.

The "Pride of the Millenium" went on to produce a litter of four cubs, three boys and a girl, on April 1, 2001, with Sunshine as the father. Siegfried and Roy came to the zoo to introduce the four cubs to the public.

From that point on, the two grown males Future and Sunshine were rotated separately from Prosperity and her cubs.

The three young male cubs went to the Toledo Zoo in 2003, at about age 2, where they lived out their lives together. Wisdom died in 2013, and Legend and Courage died in 2015. Their ashes were sent to Siegfried and Roy.

As for the Cincinnati males, Future died in 2014, euthanized for symptoms brought on by old age. Sunshine died in 2015.

For many years, Prosperity and her daughter Gracie have had the White Lion enclosure, next to the Manatee Springs, all to themselves.

Gracie is getting up in years as well. At 18, she is past the average age for lions in zoos. When Gracie is gone, there will be no more White Lions of Timbavati here.

Elsewhere in the Cincinnati Zoo, at some distance, an African Lion family lives in the African Savannah area. They are of normal coloring.

End of an Era

An accident in October of 2003 during Sigfried and Roy's Las Vegas show at the Mirage with Mantecore (sometimes called Montecore), one of the White Tigers, severely injured Roy, so the magic act was discontinued. Roy was lucky to have survived, and did make a partial recovery, miraculously. Their magic show, with the big cats, was revived for a bit, but then closed for good.
The Mirage continues to host the white tigers and white lions in Siegfried and Roy's Secret Garden, and they continue to breed them, along with other big cats in the facility, which also features a dolphin lagoon.

There, in the Secret Garden, Siegfried often visits the cats and talks with visitors. I had a long conversation with Siegfried in 2017,  where he talked fondly about these big cats, so dear to his heart. He was happy to hear news of how Prosperity was doing, and told me Roy continues to face health challenges. 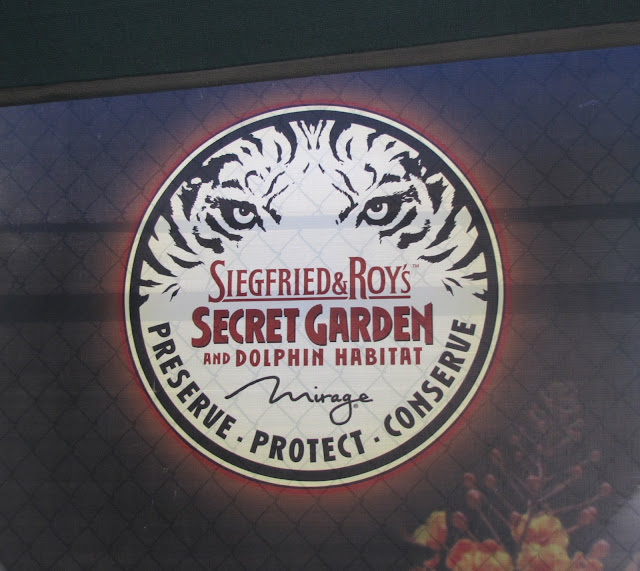 The White Lions of Timbavati in South Africa were traditionally seen as sacred animals. They had not been seen in nature since 1994, but recently, a White Lion program has tried to repopulate with animals who have not been crossbred. When Prosperity was born, in 1997, only 25 existed in the world at that time  Their pale coloring comes from a rare gene.  According to legend, white lions were children of the sun god, sent to earth as a gift. White Lion cubs are born white, rather than spotted like regular lions. They turn to a tawny blond as they get older and vary from pure white to blond. Some white lion prides have been reintroduced to the wild since 2009.

But you will rarely see White Lions in Zoos, at least not in the United States. The Association of Zoos and Aquariums (AZA) banned the breeding of white lions and white tigers in 2008, and formalized it in 2011. With White Tigers, it was reasoned that these rare colorings are a mutation and do not naturally occur except through inbreeding.

White lions are not a separate endangered species of their own, but a light colored variance of a subspecies, the Southeast African Lion, found in a certain area.  AZA zoos breed lions for genetic diversity, not for coloring. There are still some private zoos, and zoos in Europe, who actively breed White Lions.

Posted by Molly Merrow at 2:52 PM No comments: