A big party for Qannik at Glacier Run 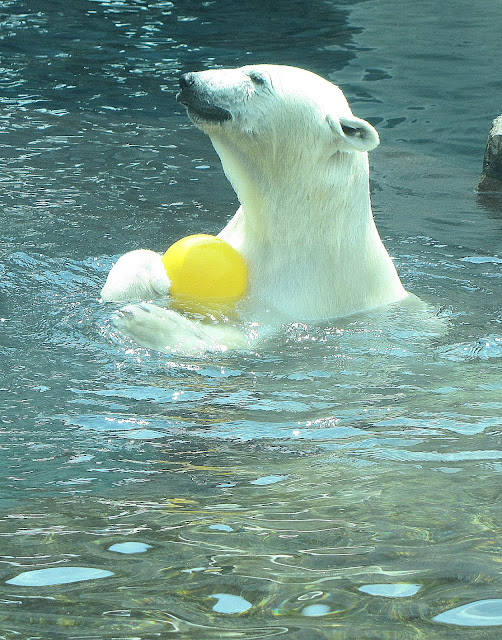 Qannik and her sister were born in January of 2011 (a guess, since she was born in the wild). In April, she was found wandering alone, separated from her mom and twin sister, near an oilfield. She was drastically underweight, just 15 pounds, about half what she should have weighed at that age.

The rescued cub was nursed back to health at the Alaska Zoo, where she won over many fans and friends, and poignant photographs of this sweet little bear girl recovering from her traumatic experiences circulated around the world, making headlines and bringing attention to the plight of the polar bear in today's changing environment.

When it was time for Qannik to leave her friends at the Alaska Zoo, UPS generously provided the logistically complicated flight to bring Qannik and her staff to the Louisville Zoo. That big adventure was called “Operation Snowflake.” Grandma Arki, from the Brookfield Zoo, was the only other resident of the brand new Glacier Run habitat at that time.
In September, Siku of the Toledo Zoo arrived. Siku is the grandson of Arki (although of course they don't know this, because they are bears). He is a year older than Qannik and while they can see each other across the way sometimes, and of course they can smell each other, they aren't ready to play together. Qannik now weighs almost 300 pounds and Siku is almost 600 pounds. In addition, Qannik has spent most of her life as an only child, and probably doesn't know how to share her toys and her space.

When asked about when Qannik and Siku will be put together, zoo staffers say that the bears have to be mentally ready for that step. In addition, Qannik will have to put on some more weight so she is closer in size to her companion. Because Qannik is property of the Department of Fish and Wildlife, the zoo must also get official approval for such a step.

The staff at the zoo always take their cues from the bears when it comes to activities and schedules. The bears come first. 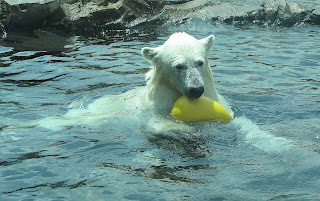 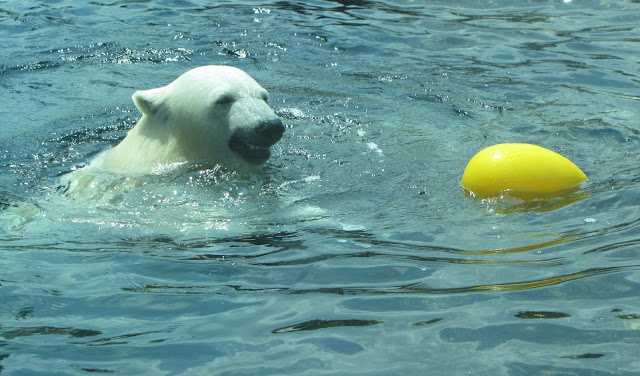 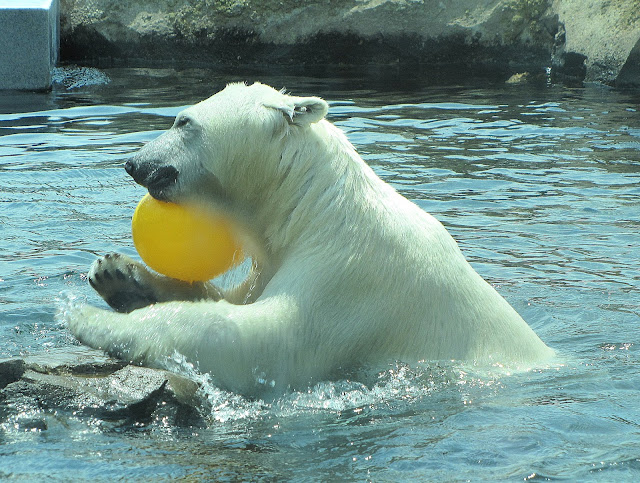 Qannik still is a busy little girl, playing with her toys and swimming. She currently has an interest in putting things like sticks, or frisbees, or balls, or her new golden egg, into a crevice in the rocks underwater, and is always surprised when they float to the top. And then she just does it again. You can see she is trying to figure things out. 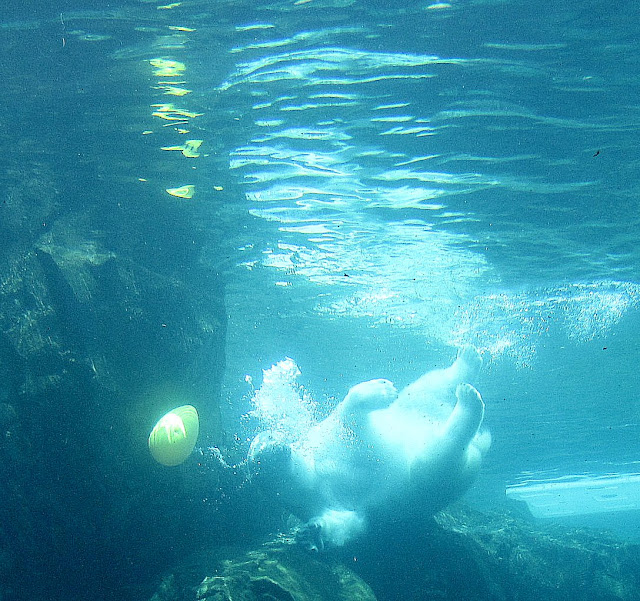 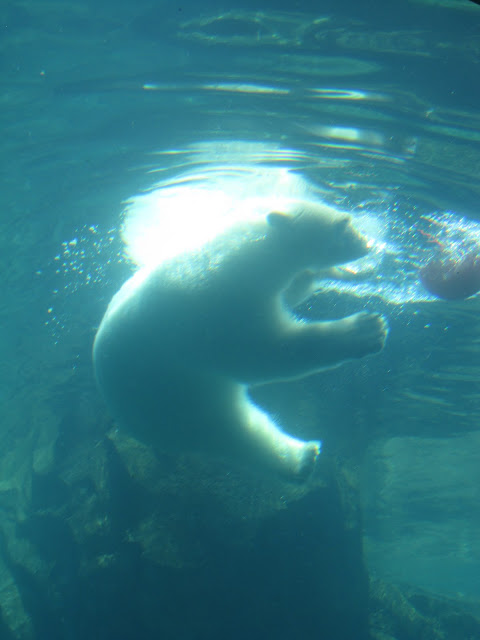 Qannik, being the "girly" girl that she is, seems to be attracted to visitors wearing pink, orange or yellow. The bright colors catch her eye. She is taking more notice of her fans than she did a few months ago, and often swims over to say hello.


Siku is currently in the rotation schedule, but a last minute change meant that we didn't get to see him on the day of our visit. Since the zoo has two enclosures where we can watch the bears, and they have three polar bears and three Grizzly bears, the exhibit is always changing. However, Qannik is usually out and about.

Grandma Arki is swimming more, and “dancing” very little these days, thanks to the many enrichment activities offered by the zoo staff. Arki was supposed to be part of a zoo training talk on the day of my visit, but the old lady decided to take a nap. She had been swimming for quite a while  that morning, so she was tired out.

Qannik can look forward to an anniversary party with presents and treats on her special day. She is one lucky girl. Happy Anniversary, Qannik! 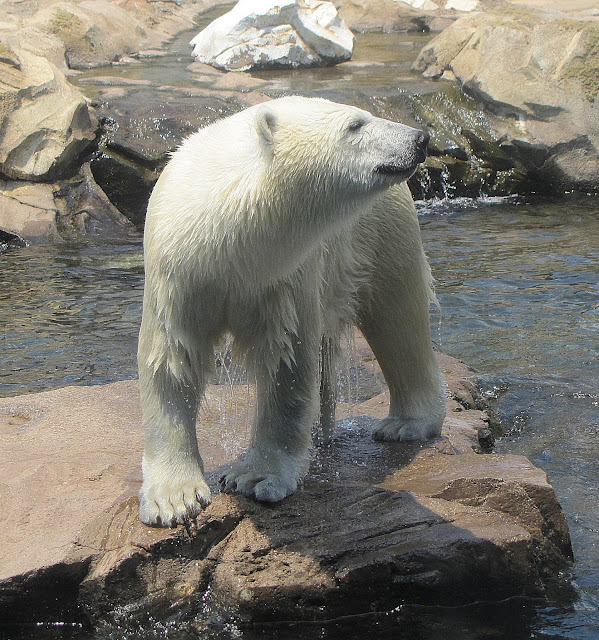 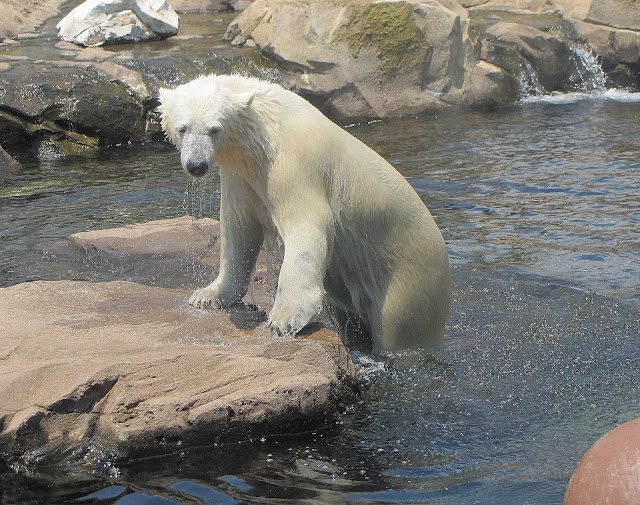 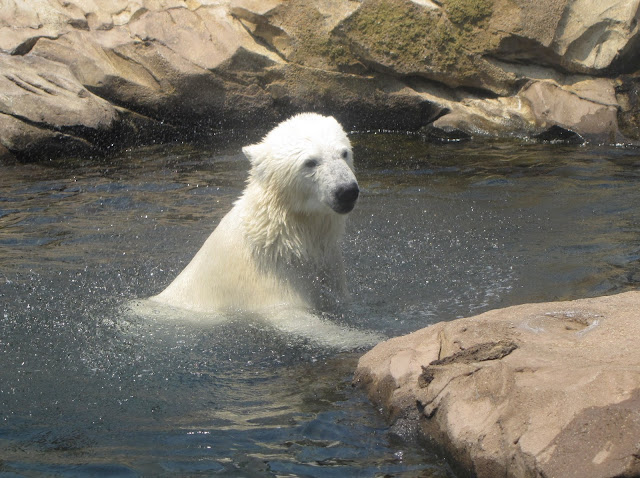 Posted by Molly Merrow at 6:08 AM No comments:

Aurora and Anana get playful


Those beautiful polar bear sisters of the Columbus Zoo never seem to get tired of playing.
During my visit in May, Aurora and Anana charmed and thrilled their fans with energetic antics, and hammed it up for the Paparazzi at their home in the award winning Polar Frontier. 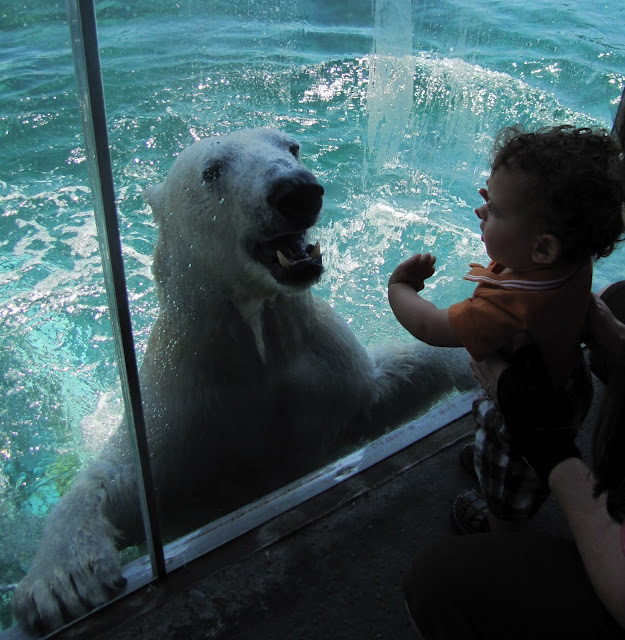 The sisters spend their day frolicking in the 167,000 gallon salt water pool, where the water is chilled to a comfortable 64 degrees (comfortable for polar bears, that is). Here you can meet the bears face to face in the covered surface viewing area, or go below to see them swim and play underwater. They just love to show off for the crowds, and interact with the children. 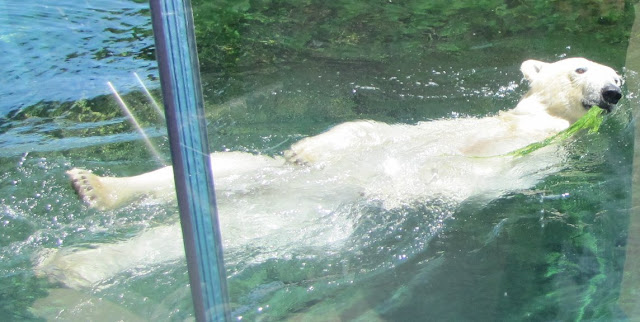 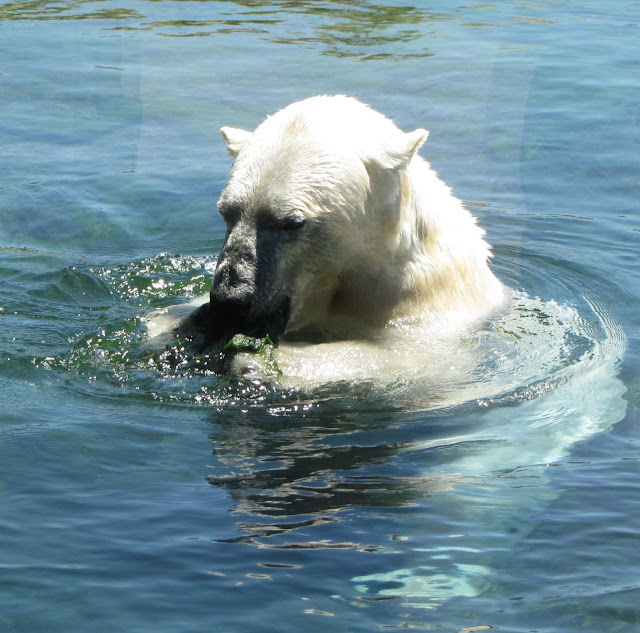 The twin girls were born November 25, 2006, in the Toledo Zoo, the daughters of Marty and Crystal. They are sisters of polar bear cub Siku and granddaughters of Arki, both now happily living in the Louisville Zoo.


These ladies they will be 6 years old this fall. I wonder if they will find a boyfriend soon? 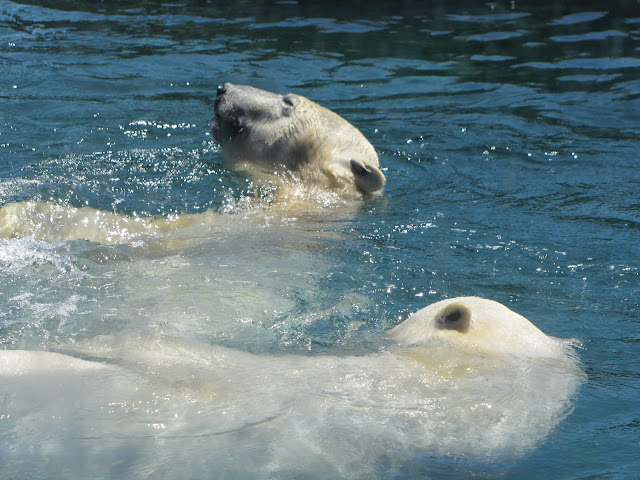 But they are happy with each other's company. It's nice to have a playmate.
Posted by Molly Merrow at 8:10 AM No comments: