Sleepy time at the Detroit Zoo

It was a quiet August afternoon when I dropped by the Arctic Ring of Life at the Detroit Zoo for another visit with retired circus bear Bärle and her daughter Talini. I was disappointed that Talini had decided to spend the afternoon in air-conditioned comfort inside, and I didn't get to see her at all.
I did get a quick glimpse of new handsome new house guest, 19 year old Aquila, visiting from the North Carolina Zoo in Asheville NC, who will be staying in Detroit for the next two years while his enclosure is being renovated. This magnificent 900 pound guy stood on his hind legs, looked around, and then disappeared for the rest of the afternoon, just as I was turning on my camera. He chose to nap in the cool inside quarters as well. Camera-shy maybe?
11 year old Lee, a handsome young stud polar bear who arrived two years ago from the Brookfield Zoo in Chicago to hopefully father a cub with Bärle, was relaxing outside. The zoo volunteer I spoke with said that the zoo now hopes that Bärle's daughter Talini, born November 22, 2004, will have cubs with Lee. Bärle, at age 27, is just too old to have another cub now. 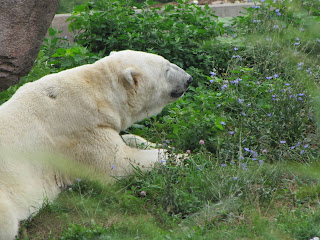 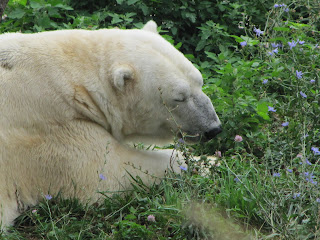 Two years ago, Lee shared an enclosure with Bärle, but he only had eyes for Talini, who was in the other enclosure with Neil and Buzz. Lee could smell her. He paced and stood up, looking, straining to see her. This year, Lee and Talini sometimes share the same enclosure, and while Lee is crazy about Talini, she is lukewarm to him, said the zoo volunteer. But she's still young.
Two years ago I visited the Detroit Zoo and met Bärle, Lee and Talini for the first time. Also sharing this wonderful new bear habitat were house guests Neil and Buzz, who were waiting for their new digs at the Como Zoo in St. Paul Minnesota to be finished. Neil and Buzz adored Talini, and had a lot of fun playing together. Now Neil and Buzz have gone back to Minnesota, and Talini has Lee for a playmate/boyfriend. 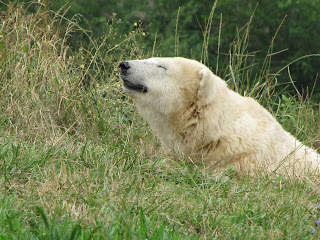 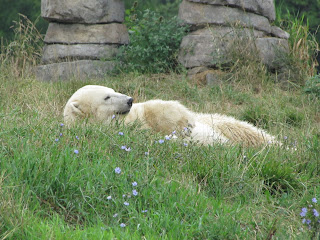 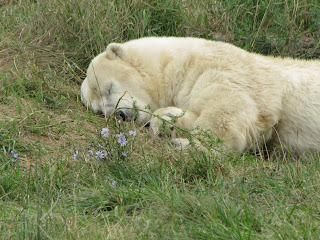 Bärle seemed to enjoy napping in the wildflowers. I suspect that all those years in captivity gave her an appreciation for the wild open spaces and fresh air. She looks wonderful.
Bärle was rescued from a Circus in Puerto Rico in November, 2002. She had spent 17 years in a cage, with no place to play or swim. She was pear shaped from inactivity, so she had to get used to having room to move around. She gained weight quickly, and soon learned to swim. On November 22, 2004, Bärle gave birth to Talini. Bärle looks smaller than a grown female polar bear should be, probably because of bad nutrition as a circus bear for so many years.
When I visit the Detroit Zoo, I have to think the bears of the past who roamed the enclosure, especially of Talini's grandfather Norton, who died of a hernia age 23 last September in the Erie Zoo, and Talini's father Triton, who died of a twisted bowel at age 11 in 2008 in the Indianapolis Zoo. They were magnificent guys, gone too soon.
The Arctic Ring of Life, which opened in October of 2001, is an incredible habitat for bears, a $16 million exhibit for polar bears, seals and arctic foxes. The two areas, the tundra and the pack ice areas, both have buried heating and cooling coils. The highlight for visitors is the Frederick and Barbara Erb Polar Passage, a 70 foot long clear acrylic underwater tunnel to view swimming seals and bears in the 300,000 gallon tank from underneath, although the bears were not swimming during my recent visit. 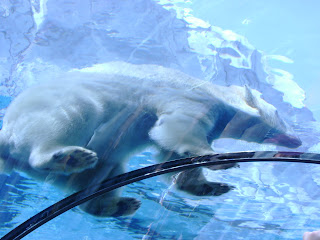 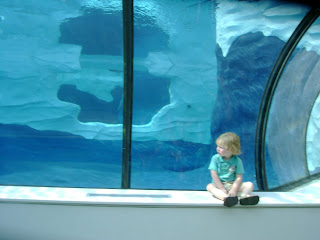 Bärle now looks wonderful, with smooth white fur and round curves. She is enjoying her retirement in Detroit. I'll have to make a return trip to see Talini and a little more of Aquila. And of course the handsome Lee.
Posted by Molly Merrow at 8:20 AM