Qannik arrives at the Louisville Zoo! 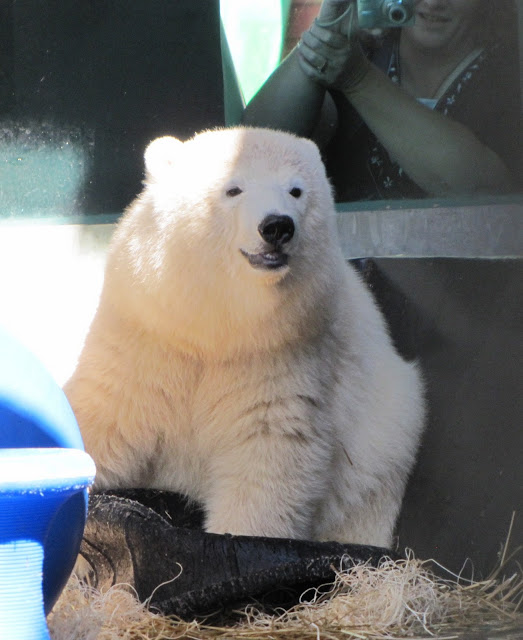 Girls just wanna have fun. That's little Qannik, the 7 month old polar bear cub now living at Glacier Run at the Louisville Zoo. She has plenty to eat, lots to do, and a bright future.
This is a far different world than the one she faced back in April, when she was found wandering alone, separated from her mom and sibling, near an oilfield. It was touch and go to rescue her, and she was drastically underweight, only weighing 15 pounds, about half what she should have weighed at that age.
She was lovingly cared for at the Alaska Zoo, where she quickly became a crowd favorite. But the Alaska Zoo didn't have the facilities to care for her permanently. The people at the Alaska Zoo had become very fond of the little rescued cub, and she even got to meet Jack Hanna.
When it was time for Qannik to leave her friends at the Alaska Zoo, UPS generously provided the logistically complicated flight to bring Qannik and her staff to Louisville, where she settled into the fabulous new Glacier Run habitat in late June. 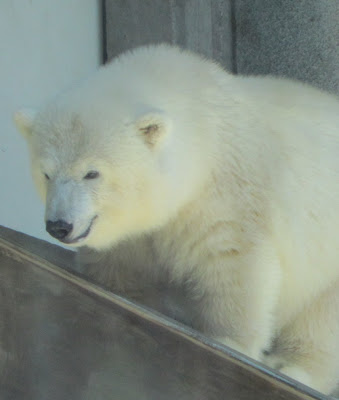 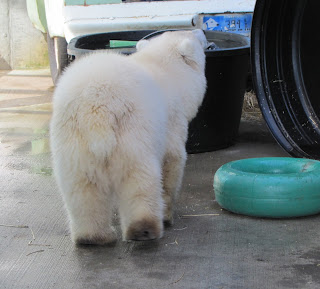 She now weighs in at a hefty 125 pounds (on Sept. 6, plus a pound a day, so probably more like 135 pounds now) and meets her adoring fans from 10 a.m. to noon and from 2 to 4 p.m. each day. The ice princess holds court in her toy-filled bear condo across from the big pool in bear alley. She is supervised 24 hours a day, and is always accompanied by her “staff” when the public can see her. She is observed through video-cameras at all times. Her caretakers come spend time with her in the evening, too. They feed her three times a day, change out her toys often so she is always entertained (between naps), lead her during her running romps, and keep detailed journals of her interactions, reactions, moods, and activities. She is now past the age when keepers can be in her enclosure with her, but they interact with her all the time.
The glass walls of her condo are still semi-covered with posters, but there are plenty of viewing spots with a clear view of this little furry dynamo. While she was used to crowds at the Alaska Zoo, she wasn't used to glass, and the Louisville Zoo is gradually removing the papers from her walls. 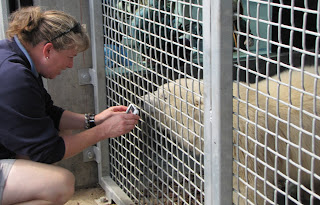 Keeper Jane Anne Franklin says that they are working hard to keep Qannik busy, so she won't develop the “stereotypical” pacing you sometimes see in zoo bears. Whatever Qannik anticipates, her keepers do the opposite, says Jane Anne. They give her new toys, new textures, and games. She plays with ice-filled pools, cardboard, mulch, straw, greenery, balls, chew toys, and boxes. Often, things are hidden inside the boxes, or in jute bags, so the cub will have fun puzzling them out. There is an igloo doghouse that Qannik likes to push around, hide in, and turn over to make a cozy bed. The enclosure has stairs, several levels and a truck bed, and the cub is always jumping and climbing. She also has access the the downstairs bedroom and pool area, if she wants to nap down there. There is also a covered overhead crossing that Qannik uses as a raceway. More on that in a future postings. 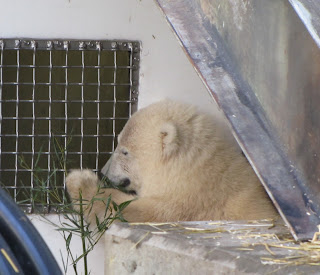 Jane Ann says that if you can keep a cub busy enough, you can prevent the development of the stereotypical pacing behavior, and once the bear get past a certain age, she will never develop the pacing habit.
More next time on Siku, Arki, the Glacier Run area, and Qannik of course.
Posted by Molly Merrow at 8:05 AM