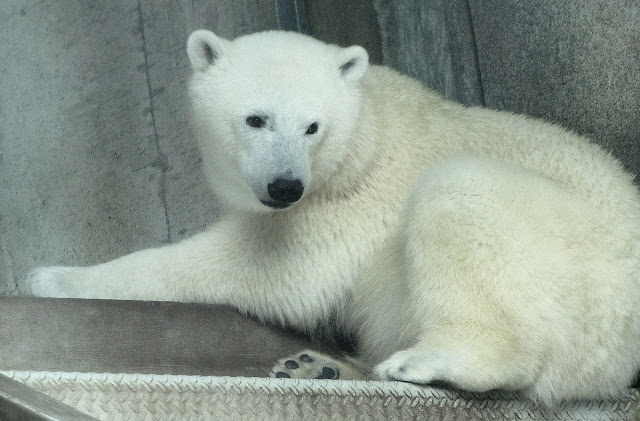 My early April visit to the Louisville Zoo brought me face-to-face with 15 month old Qannik. No longer the fluffy little baby bear I met last fall, Qannik is still just as cute as can be, but weighing over 250 pounds. Her life in the Louisville Zoo is helping her to grow up to be a happy and healthy polar bear. She was rescued in Alaska last year, starving, motherless, and weighing only 15 pounds. After spending several months being pampered at the Alaska Zoo, she flew to Louisville to begin her new life. 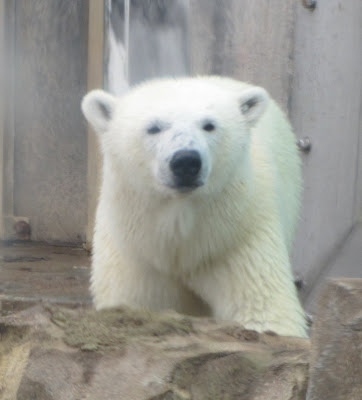 The Louisville Zoo believes in making life interesting for its bears. Polar Bears and Grizzly Bears in the wild live in an ever-changing world, and this zoo is shaking things up to make life fun and unpredictable in a number of ways.
For one thing, the bears are rotated in and out of the two exhibit areas several times a day, spending some time in their bedrooms, and some time in the big pool area, and some time in the “loading dock” area. Glacier Run is designed to look like an abandoned mining town, with the interesting features often doing double duty as bear enrichment and exercise equipment. 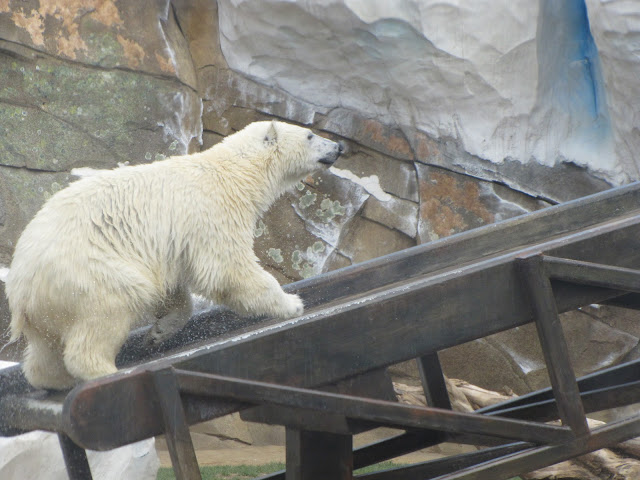 And the staff always considers what is best for the bears, not necessarily what is best for the public. When Qannik, and then later Siku, first arrived, it was slow going, allowing each bear to adjust to the new environment. When it was time for Qannik to make her debut, she had the run of the glassed-in room, but it was covered with papers so she could get used to the new material. The posters were slowly removed over a period of weeks so she could slowly adjust easily to having her fans invited into her life. The same process has applied to Siku. He is now occasionally in the glassed in room, and will soon be in the big swim area. At this zoo, the big question is “What is best for the bears?” 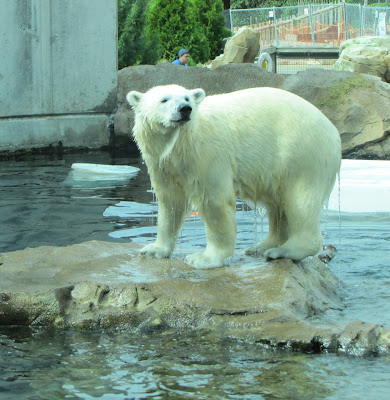 Qannik spends 80 percent of her time in the pool when she is in the larger enclosure. She uses her natural hunting instincts to stalk her buckets and balls, and jump on her pretend ice floe. 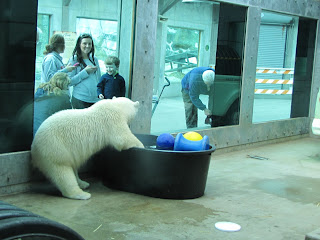 When she is in the loading dock “playroom” area she often plays in the pools full of water or ice. When it snowed over the winter, staffers filled up her pool with ice and packed snow on top of it. She loved that. 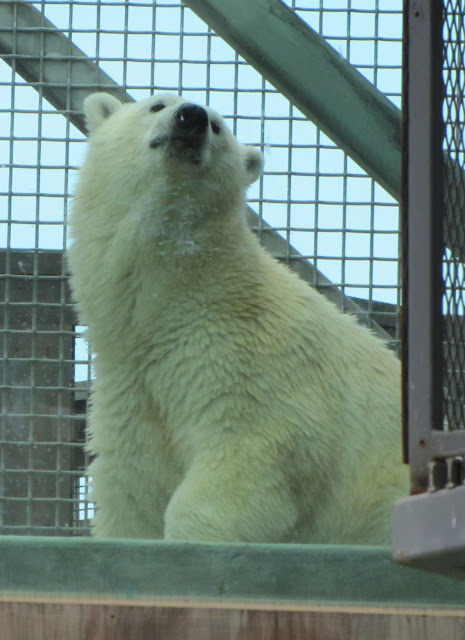 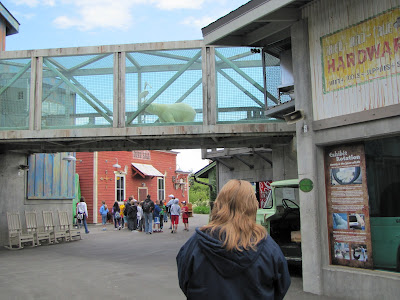 Sometimes the keepers feed her meat snacks on a stick through the fencing in the upstairs crossover of Bear Alley. While she was enjoying her tidbits, the crowd below was enthralled by her guttural response. The noises she makes are startlingly monstrous, kind of a low and loud growl. It's hard to believe that such scary noises are coming from such a cute little snowball of a bear. 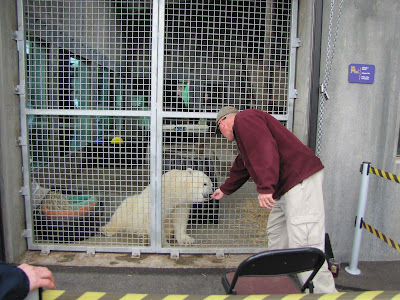 Qannik used to take a break at lunchtime for a nap, but her keepers say that she now pretty much keeps going all day, with only a few brief moments to rest.
The keepers watcher her constantly, with a clipboard in hand, documenting her activities and how much time she spends doing whatever she is doing, and where. They also test “poop” samples every day for stress hormones, to make sure the bears are happy. 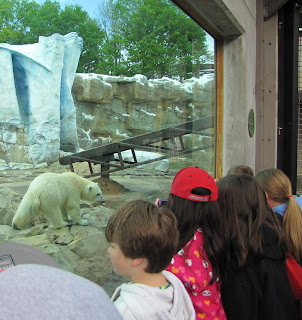 Qannik responds whenever she hears the voice of one of her keepers, thinking that they might have something for her. But she pretty much is oblivious to her fans. She does whatever she feels like doing, ignoring all her visitors. 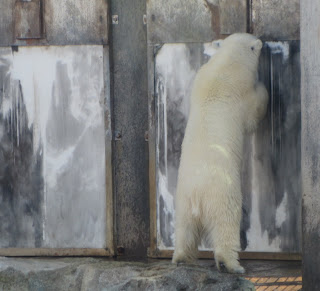 When she is in the big pool area, she dives and swims and plays with her toys, taking a break every once in a while to run over to the door that she knows Arki is behind to scratch at it. She loves to run up and down the ramp, too. 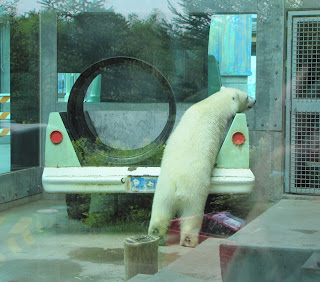 When she is in the loading dock area, she runs up and down those stairs, and checks out the overhead crossing. She jumps up into the back of the “truck” to check for hidden treats. There was a little bird in the hay and she tried to catch it. The keepers say that although she does try to catch the occasional bird, she never really succeeds. The door to her downstairs bedroom is open so she has the choice to rest down there. Louisville Zoo Director John T. Walczak explained to me that when the doors are closed, the doors become a focal point of interest and stress. When the bears have a choice because the doors are open, they are less stressed. It is all about giving the bears a choice. He is also a great proponent of the rotating schedule, which gives the bears variety and the unpredictability they would have in the wild. 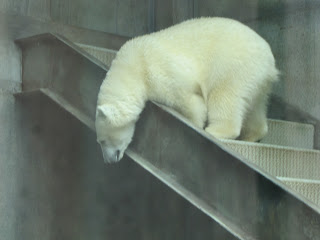 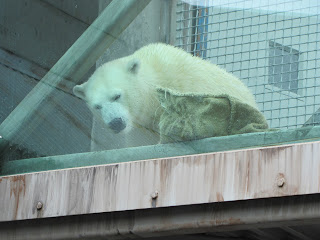 I suspect the keepers lose sleep thinking of new ways to surprise the bears. They hide food in tied up jute sacks. Snacks are hidden in plastic pails with lids. Treats are lurking under piles of hay, but the bears can find them with their strong sense of smell. 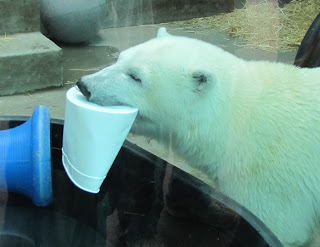 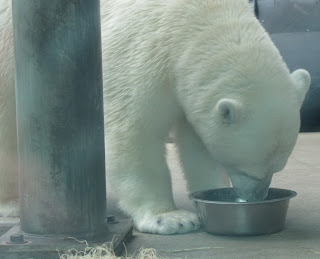 Sometimes treats are hidden in doggie Kongs. I saw that Qannik's environment was changed up several times in an afternoon. Barricades were put up to challenge her. Snacks were hidden. New ice tubs were put out. Toys were switched out. There was always something new for this busy little girl. 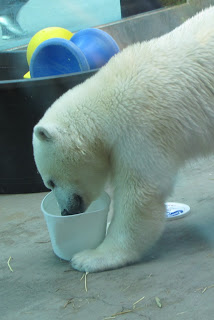 Behind the scenes, Siku was getting the same treatment in his luxury condo with a swimming pool. Grandma Arki and the Grizzly Bear family also have lots to do to exercise their minds and strengthen their bodies. There is never a dull moment for the bears at the Louisville Zoo.
Because Qannik is being raised in this exciting environment from a very young age, the hope is that she will not develop the stereotypical pacing behavior often seen in older zoo bears such as Arki. Even 27 year old Arki is benefiting from the new activities and rotating schedule at the Louisville Zoo, although she will always do her habitual little “dance.” More on Arki later. 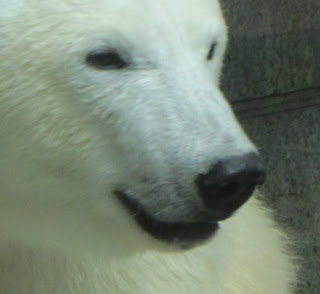