Best friends in the Highlands

Best Buddies in Scotland, that defines Team Walker and Arktos. 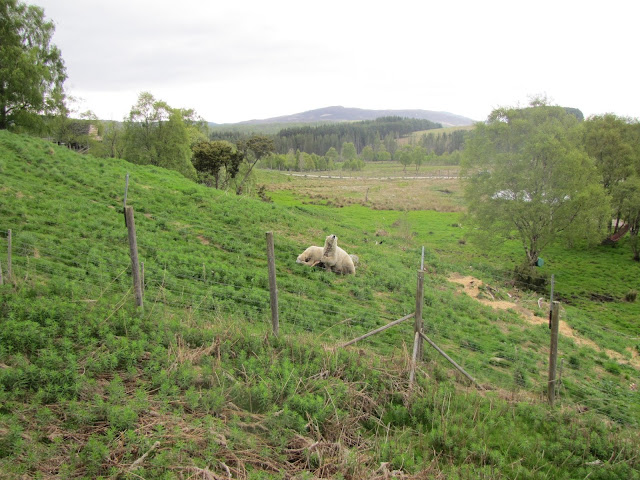 Walker and Arktos in the large habitat at HWP.
The bears could choose to put plenty of space between them,
but they would rather be close together.


They do not like to be separated, and when Arktos went to the other side of the park to stay for a few months with Victoria last year (for breeding), Walker really missed his friend, and was so happy to have him back.


That is not to say that they don't have their squabbles, but they quickly make up.

Click on this link below to see a very short squabble between the best friends.

Video: click on link to see Arktos and Walker in little dispute!

When we were there at feeding time on a windy afternoon in mid May, they growled and tussled and stood up to each other, and then it was over, and they were friends again. We were told that it was because it was the end of breeding season, and they are still a little competitive, as males living together might be. Even though Victoria and baby Hamish were all the way across the park, the two male bears could still smell her. It's instinct.


Unlike some polar bears who live together but don't really interact much, Walker and Arktos seemed to be always together, even cuddling up to sleep. When one goes this way, the other one follows.

A little history: Highland Wildlife Park was founded in a wild national park northwest of Edinburgh in 1972 and populated with native species. As years went by, the mission changed to include northern and mountainous species. The first polar bear in Highland Wildlife Park was elderly Mercedes in 2009. At that time she was living in Edinburgh Zoo, the only polar bear in the U.K.

Her story: At the age of three, back in her native Churchill, Manitoba in Canada, Polar Bear Number 39 had been deemed a nuisance bear for raiding garbage and hanging around town. They painted the number on her, took her a great distance away, and hoped for the best, but she returned, caused trouble, and returned again. And again.

Under the three strikes and you're out rule, she was sentenced to be shot. However, the Mercedez-Benz company offered to pay for the transportation for this young bear, and Edinburgh Zoo offered her a home to live with their male polar bear Barney.  In 1984 she was flown to Scotland, where she lived for 25 years as the main attraction of Edinburgh Zoo. She even had two cubs. She was quite famous. Barney died after choking on a child's plastic toy thrown into the enclosure, and then she was alone.  Her hillside habitat at the Edinburgh Zoo was small, and she paced. The Royal Zoological Society of Scotland, which oversees both Edinburgh Zoo and the Highland Wildlife Park, looked for a better solution for Mercedes.

In 2009 Mercedes was moved to Highland Wildlife Park to enjoy her retirement years, where she had a beautiful spacious area of over four natural acres in which to roam. The Scottish Army even pitched in to help build the enclosure designed just for her. Mercedes loved the deep snow and the ice on the pond during her first winter.

The enclosure was designed to be much lower in cost to build and operate than a standard zoo habitat, taking advantage of the natural terrain, and also having much less of an environmental impact, while giving the bears a great deal more space to roam in one of the most beautiful spots on Earth.

In 2010,  two  year old Walker arrived from the Netherlands to keep her company, but she was not anxious to play with an active young cub. Her arthritis was bothering her, so after some rocky introductions, zoo staff decided to keep the bears separate.

In 2011, due to rapidly failing health and signs of senility, Mercedes was put to sleep at the age of 30, a good age for a polar bear to reach. And thus Walker was alone.

But not for long. Arktos, about a year older than Walker, was living in Hannover Germany with his twin brother Nanuq and another young male, Sprinter. In 2012 Arktos moved to HWP as a companion to Walker. The boys quickly became best friends and playmates.


Walker was born in Ouwehands Zoo, Rhenen, the Netherlands in December of 2008. Walker was famous from birth, for his birth (and that of his twin), was filmed and featured in the David Attenborough BBC television series, "Frozen Planet." Walker and little brother Swimmer (both named after Kimberly Clark diapers, the rescue sponsor of their mother Huggies) made their public debut in March, and tiny Swimmer captured many hearts, for he was about one third the size of his brother. About a week later, poor Swimmer died during a swimming lesson, as some inborn weakness caused something to burst. Huggies and Walker were seen grieving for hours.

Walker, whose father was Victor (now living in Yorkshire Wildlife Park), grew into a healthy young bear, and went to live in HWP next to Mercedes, as we said, in 2010. Walker's mother Huggies had been rescued at the age of five months off the coast of Siberia, and brought to safety in Ouwehands Zoo courtesy of the diaper company.  Walker's father Victor came from the Churchill-Vienna dynasty of Rostock Germany.


Arktos, living with his twin brother Nanuq in Hannover, Germany, were born a year before Walker, in 2007. Mother Olinka's father was Omaha, son of Olaf and Olga of the Henry Doorly Zoo in Omaha, Nebraska, USA. Father Eric's mother was Aika of Tierpark Berlin. Arktos has inherited his Grandmother Aika's large round ears.


How to tell Arktos from Walker? A keeper tells me that, in addition to the difference in ears, Walker has smaller eyes, and wrinkles up his nose more.

Arktos and Walker spend their days together, sometimes swimming in their large pond, wading in the mud, foraging for the treats (often thrown into the pond for enrichment), and snuggling up for a nap. Where you see one, the other is never far away. Although polar bears are said to be solitary animals in the wild, it is beautiful to see such a friendship in the Highlands.