The Three Bears of the Cincinnati Zoo 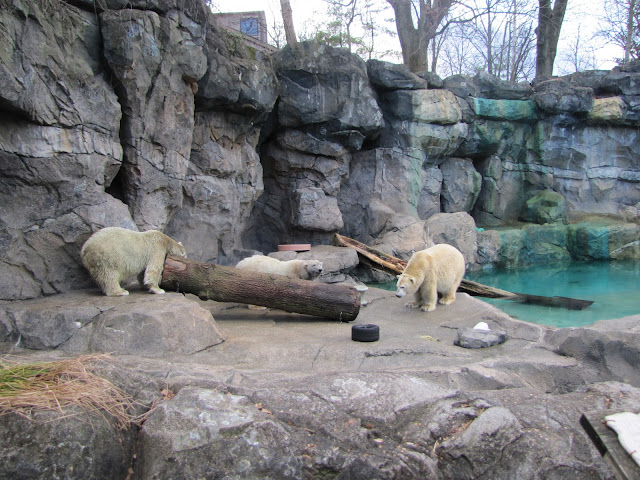 The Cincinnati Zoo and Botanical Garden is currently home to two lady bears named Rizzo and Berit, and their gentleman friend Little One, or as he is sometimes called, Lil One. The have a roomy enclosure with waterfalls and swimming areas, and good visibility for the visitors.
14-year-old Rizzo has been in Cincinnati the longest. She was born at the Buffalo Zoological Gardens on December 10, 1997, and came to the Cincinnati Zoo in October of 1998, as a cub almost a year old. Her mother was Becky, and her father was Herman Jr., She is to be returning to Buffalo soon, for breeding purposes. There is a male there who was rescued from the wild as a cub, and his genes would be important to pass on.
13-year-old Berit was born on December 28, 1998 in the Denver Zoological Gardens, along with her twin brother Ulaq. The twins came to the Cincinnati Zoo in June of 2000. There had been a naming contest in Denver for these bear cubs, and Berit was named after the granddaughter of the winner of the contest, who was also a major supporter of the zoo. There was a bit of a controversy when the twins came to Cincinnati and another naming contest was announced. The person in Denver who had already won and paid for the naming rights protested loudly. Even though the cubs were renamed Imaq and Sedna in Cincinnati due to the new contest, the new names did not stick for some reason, and the bears continued to be called by their original names.
The keepers were devastated when Ulaq unexpectedly died April 8, 2004 of Kidney failure, strange for a bear of that young age. The polar bear enclosure was closed for a time, while the officials determined the cause of death.
Back in 2000, about the time Berit and Ulaq came to Cincinnati, back in Denver, their mother Ulu had been diagnosed with a spinal lesion, and died. Ulu was also the mother of the ultra-famous twins Klondike and Snow, born in 1994. She rejected the babies and the zoo staff famously raised them. They now live in Sea World in Orlando, Florida.
Little One was born at the Cleveland Metro Parks Zoo on December 13, 1989, which makes him 22 years old. He has a slight limp in his left leg, due to an injury as a youngster. He left his mother Snowball and Sister Aurora to come to the Cincinnati Zoo in January of 2007. There were hopes that he would breed with the two females here, but so far, no cubs. 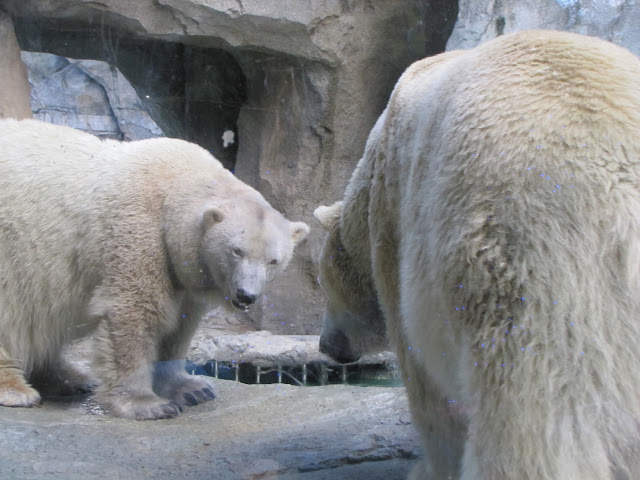 Which bear is which?
It isn't hard to tell the three bears apart, once you get to know them. 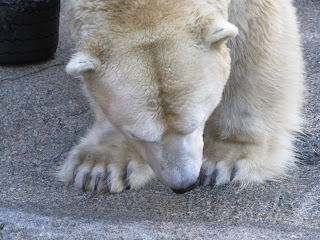 Little One is the big husky male with a broad face.
Rizzo is like a round, fluffy snowball, with a roundish head. 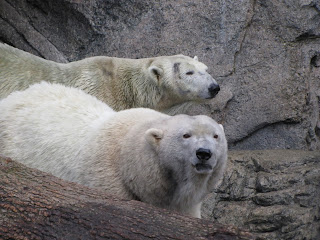 Berit, here behind Rizzo, is built like torpedo, long and lean, with a narrower head. Berit and Rizzo like to cuddle up together. They have been together a long time.
Posted by Molly Merrow at 1:26 PM