The beautiful Katjuscha is 36 today 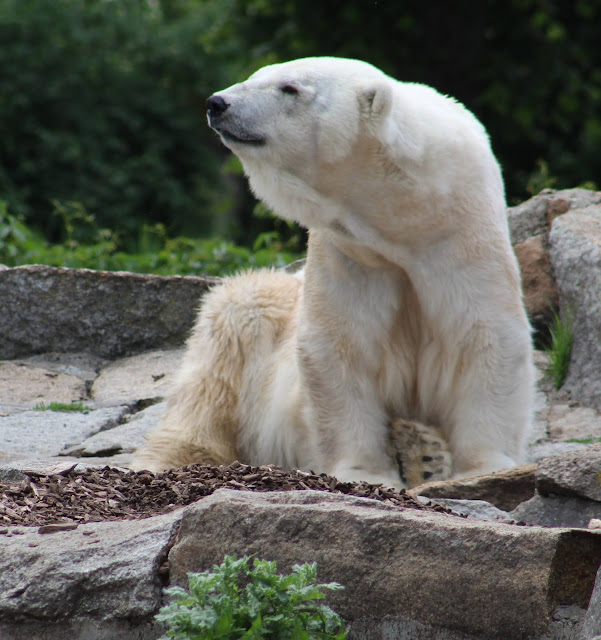 It is rare for a polar bear to reach the age of 36, but Katjuscha of the Berlin Zoo is celebrating that milestone today. She is the oldest polar bear in a European zoo. I don't know of any polar bears in the world who are older. There is a lady bear in the Milwaukee County Zoo in the U.S., Snow Lily, who is two weeks younger than Katjuscha.

Katjuscha does have a younger sister, born in 1989, Antonia the famous dwarf polar bear who now lives in Gelsenkirchen. Their parents were mother Nadine of Karlsruhe, and father Willie, who lived in the Berlin Zoo but would come to Karlsruhe during breeding season to visit the girls. 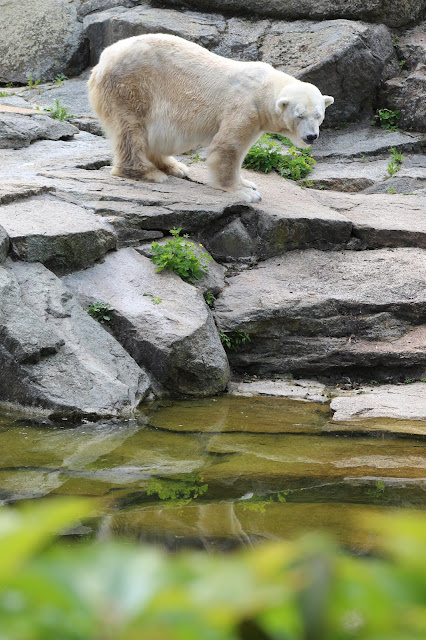 Most of these photos are from my last visit with Katjuscha, in May of 2019. She was active, roaming around her enclosure at the Berlin Zoo and having a fine time on a lovely Spring day. She often takes a swim, but she did not during my most recent visit. When I came back in the afternoon to check on her, she was sleeping.
My friend Ralph visited her in September, just two months ago, and reported that she spent much of her time swimming. Here is a link to his report in Knuti's Weekly.
Ralph visits Katjuscha in Berlin 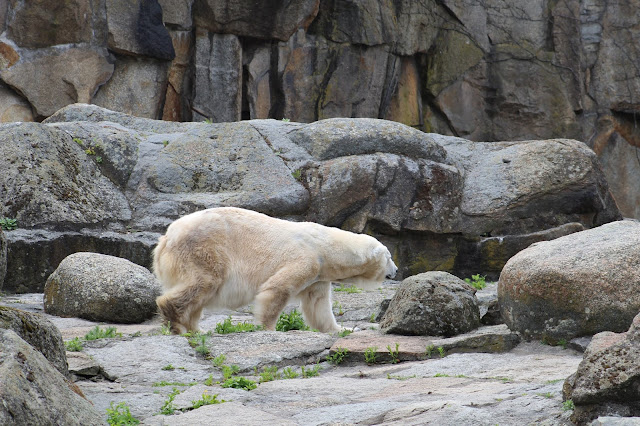 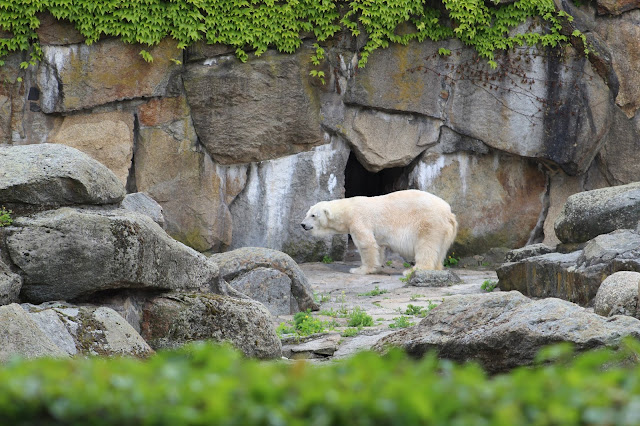 Kati does like to roam around and patrol her enclosure, check things out. She has some arthritis, but it doesn't stop her from being a very active senior bear. 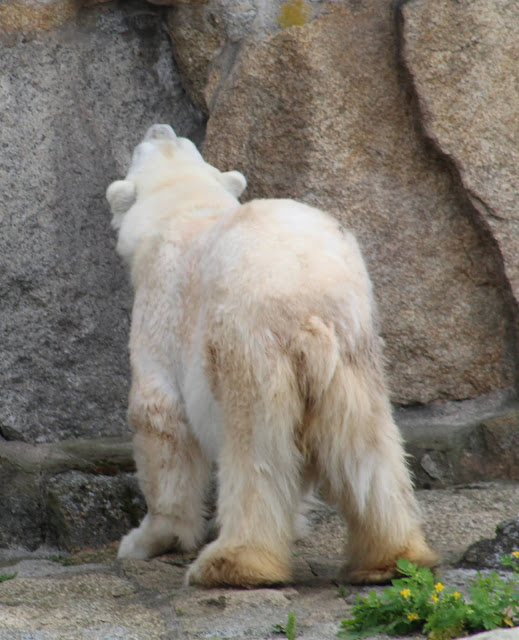 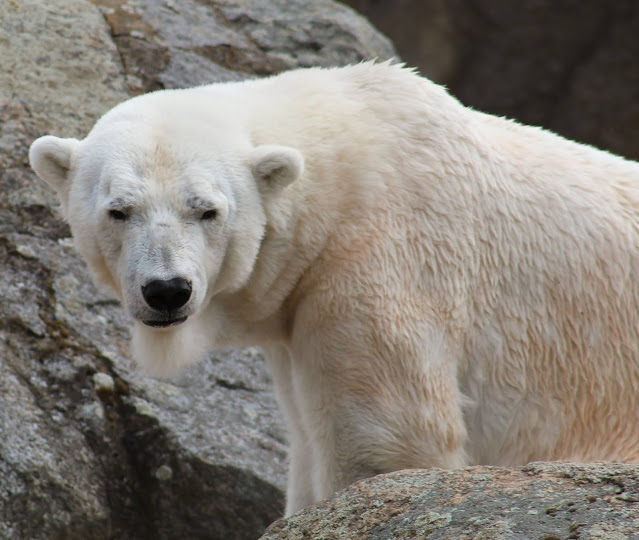 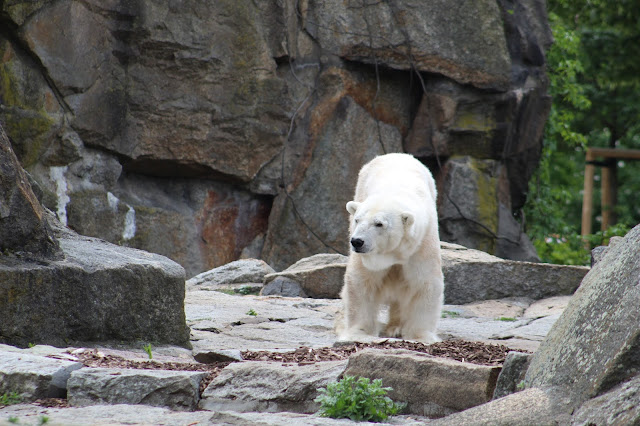 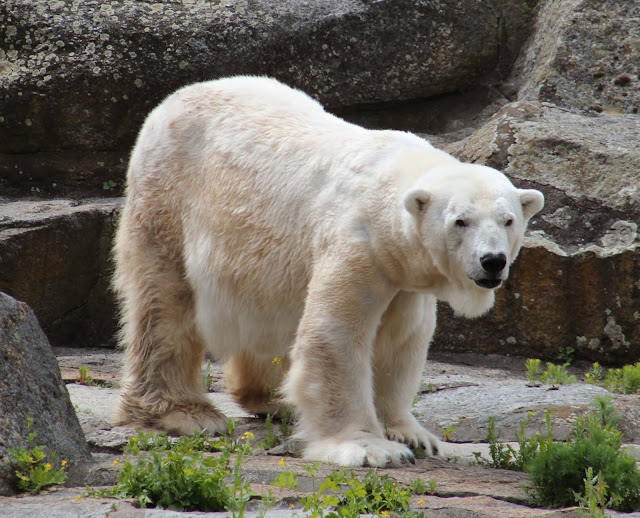 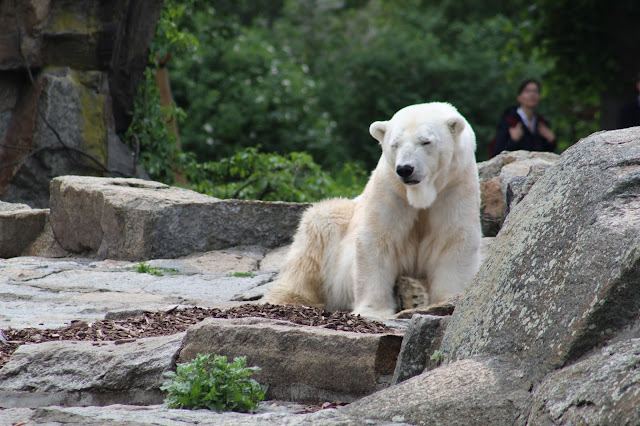 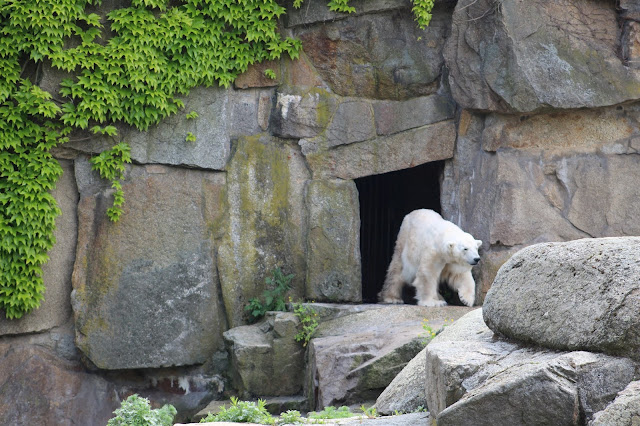 Katjuscha tends to wander in and out of her door, and sometimes naps there. She has lived alone for a few years now, since the death of Tosca and then Nancy. She seems to like being on her own. Nancy and Tosca had always teamed up as best friends, and Katjuscha was left out anyway. 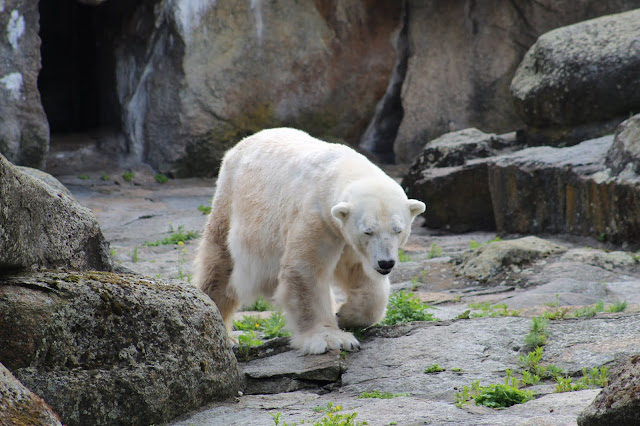 When I visited Berlin in 2014, Katjuscha invited me to a tea party at the enclosure, with bread rolls served daintily upon her paw. 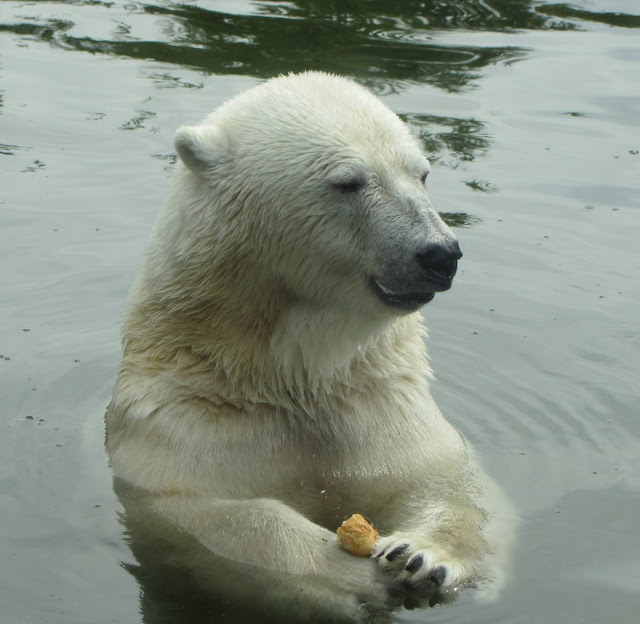 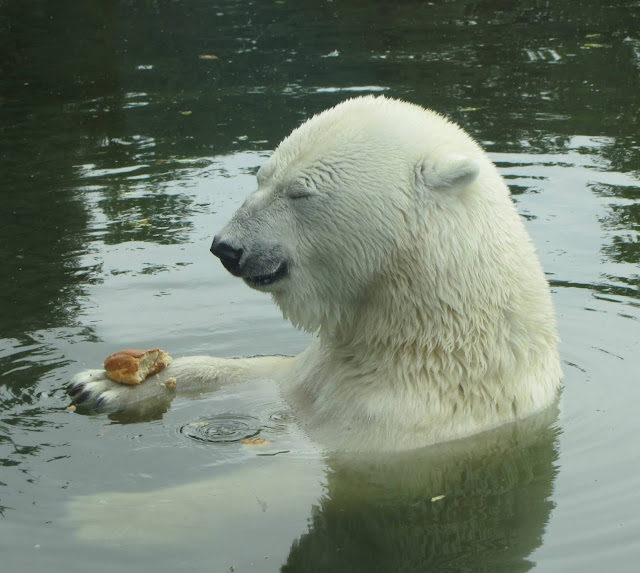 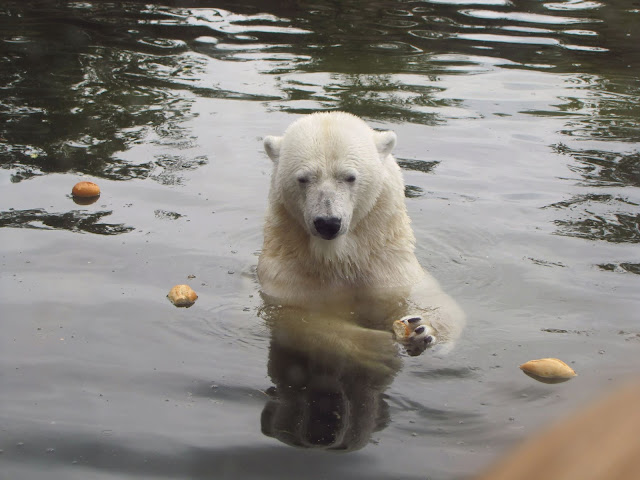 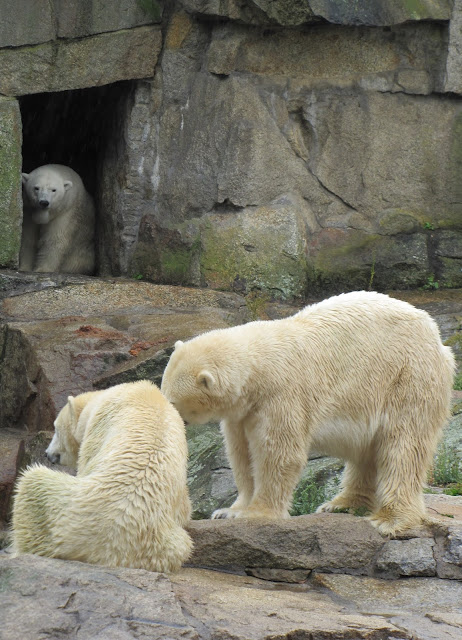 Back in 2014, Tosca and Katjuscha's sister Nancy would play together, and even lick ears. Katjuscha was left on her own. She has always liked to sit in the door and watch the rest of the world go by. 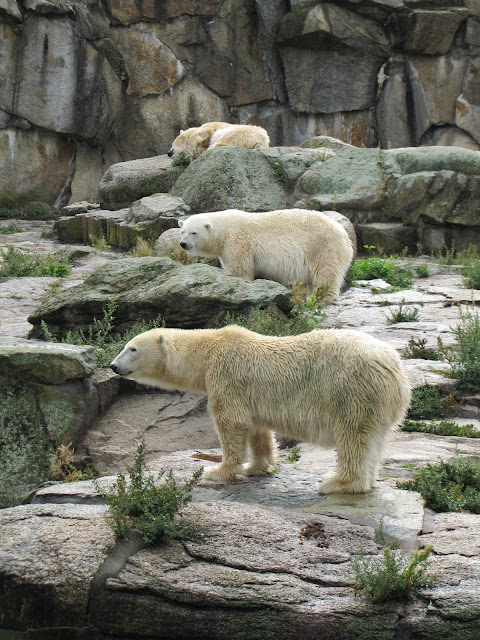 Tosca, Katjuscha and Nancy in Berlin in 2014. 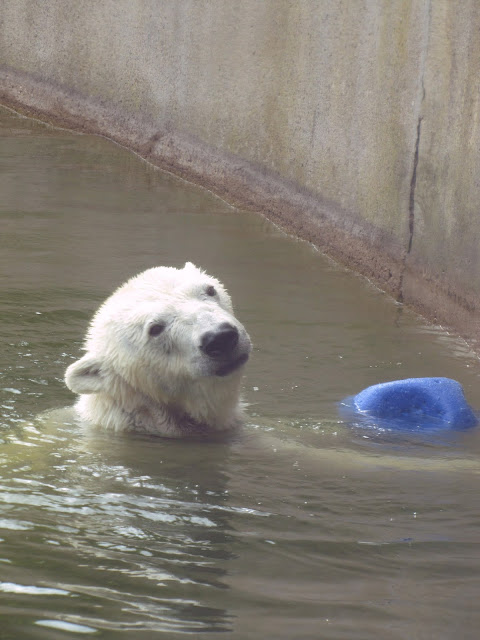 During my visit in 2015, Kati went into the water and played with a blue ball. She had a great time, just like a cub. 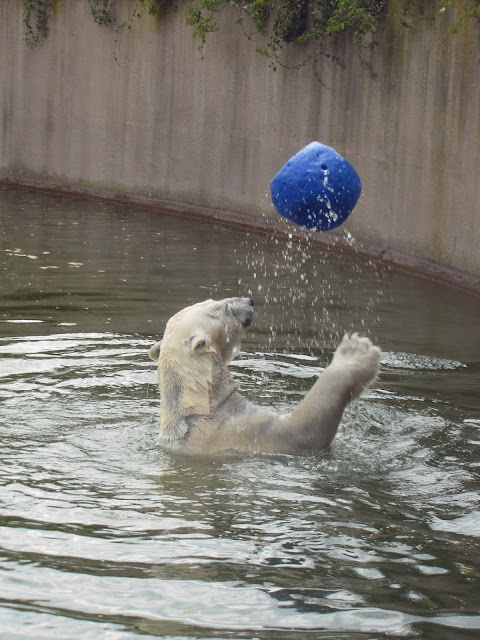 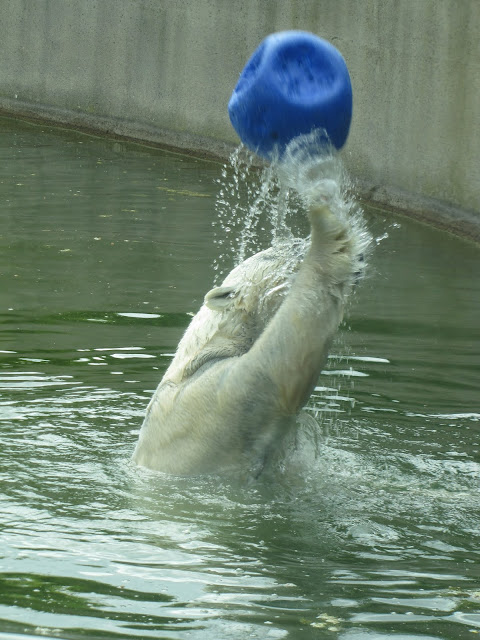 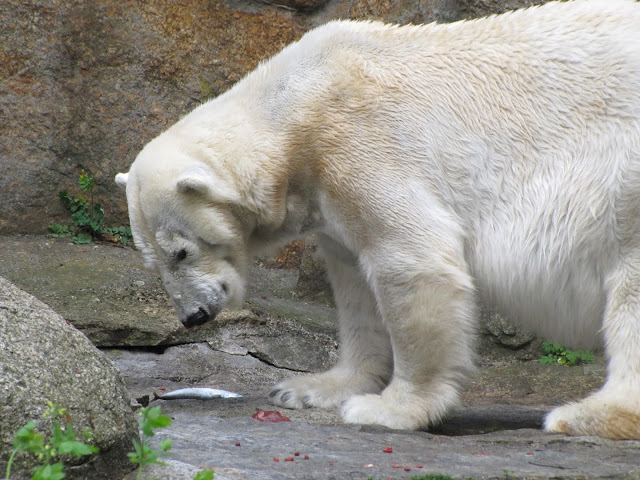 Kati gets a snack of some meat and fish. She does like her snacks. This was in 2015. 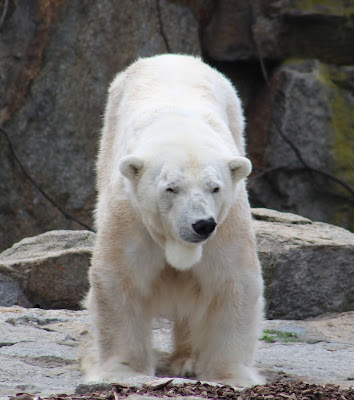 Happy Birthday Katjuscha!
I hope you get some good snacks today!
Posted by Molly Merrow at 1:40 PM