Buzz and Neil catch a fish

On my second visit to Neil and Buzz in the Como Zoo, in February, 2011, Buzz caught the second fish in the eight months they had been in the new enclosure. He took it onshore, and Neil decided he wanted some too. Buzz really didn't want to share. Buzz, while a little bit smaller, is the dominant brother.
They both seemed much more interested in fishing after that. Maybe they have started to figure it out how to catch a fish - at age 15.

An associate visited Neil and Buzz last week in early April, and reports that Neil is still spending his time napping in the central enclosure, and Buzz is playing, swimming and fishing in the right hand enclosure. Not much has changed. While food is hidden in the lefthand enclosure, and Neil did go there for a moment to retrieve a snack, the bears mostly stay center and right. The bears always seem to have a good crowd to watch their antics.
Posted by Molly Merrow at 7:01 PM No comments:

Neil and Buzz in their great new space.

The old polar bear accommodations at the Como Zoo in St. Paul, Minnesota were cramped and not very stimulating for the brother bears who lived there. 15 year old Neil and Buzz, who had been born in the Louisville Zoo, came to Como in 2002.
When the Como Zoo decided to modernize and expand the polar bear digs, the brothers moved to the Arctic Ring of Life in the Detroit Zoo in May of 2008. The Arctic Ring of Life, at over four acres, is the largest of its kind in North America. While in Detroit, Neil and Buzz shared the habitat with retired circus bear Barle, her young daughter Talini, and Lee, who was visiting from Chicago. I visited them in the Detroit Zoo in July of 2009, and they loved having all that space. They really liked playing with Talini, who was 4 years old at the time.
Now these fun-loving brothers are back again in their newly renovated and expanded home in the Polar Bear Odyssey, which opened in June of 2010. 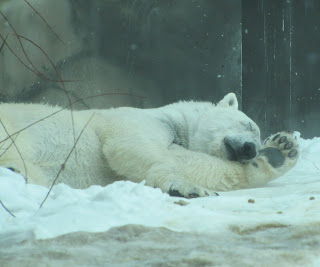 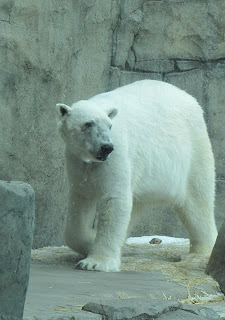 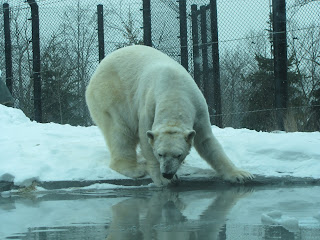 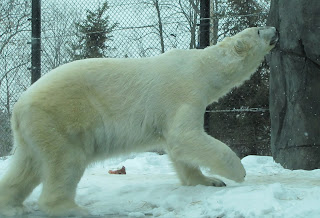 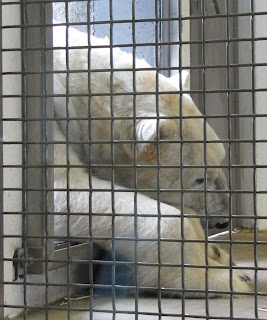 The new Como habitat recently received the Three Diamond Rating by Polar Bears International, one of only two zoos in the world with that distinction.
Polar Bear Odyssey emulates a Hudson Bay ecosystem. The bears can play in a river-washed stream, surrounded by rocky cliffs and evergreen plantings. They also enjoy a 260 square foot digging pit filled with bark chips, gravel and sand. Treats are often hidden here for the boys to find.
Their new home is a 13,140 square foot outdoor habitat that is four times larger than the former polar bear exhibit. They have two pools of various depths. One pool contains live fish for the bears to catch and eat. The habitat has an indoor observation room for visitors, especially welcome in the winter. The two areas can be separated if needed.
On the day I visited in February, Buzz caught only their second fish since they moved back. They were still learning how to do this neat trick.
Posted by Molly Merrow at 3:36 PM No comments:

Afternoon at the Columbus Zoo - Anana sniff out something yummy, and goes after it. Sister Aurora comes along and wants some too. The easiest way out to the treasure is to balance on some spindly branches and broken trees. The bears look like ballerinas as they balance their way along the "wire." 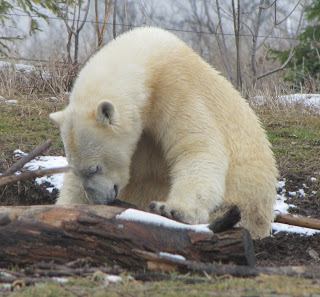 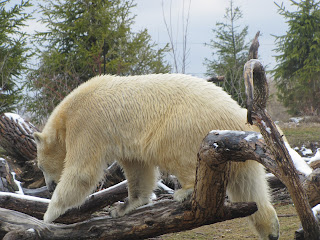 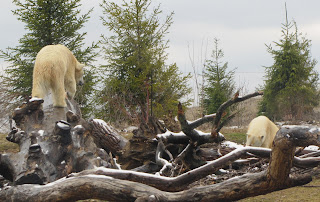 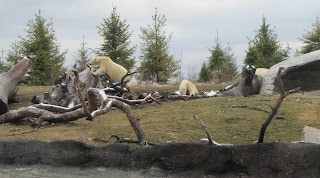 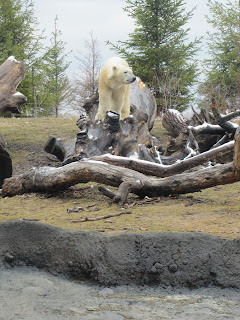 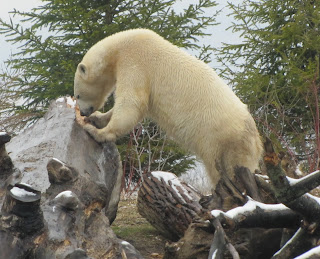 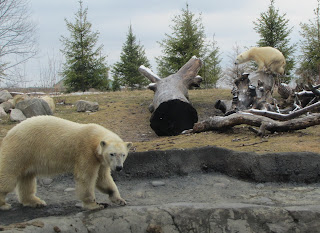 Posted by Molly Merrow at 11:23 AM No comments: 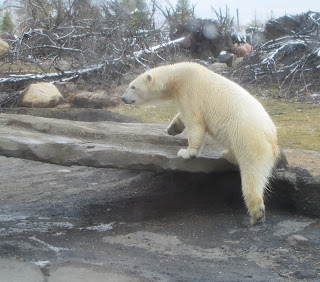 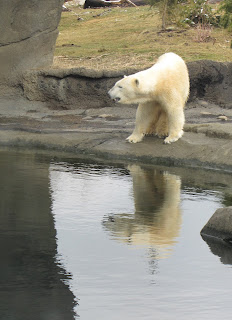 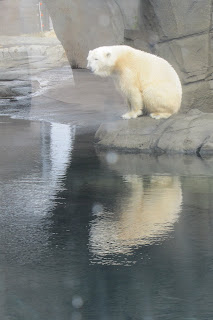 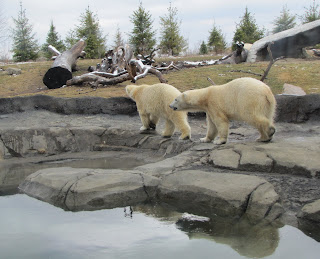 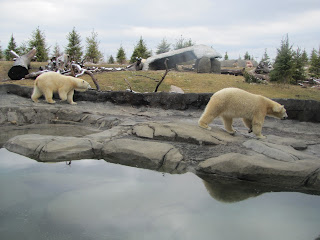 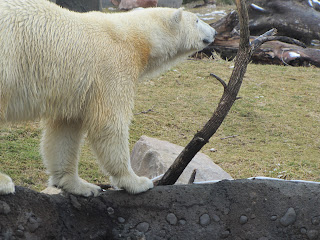 Posted by Molly Merrow at 6:31 PM No comments: