This past season, there were nine polar bear cubs born and surviving in zoos around the world, of which we are aware. (There are polar bears in zoos in China and there may have been cubs but we haven't heard.)

Here is a rundown of the cubs

I did travel to Europe in May and June to see the four European cubs, and to Toledo in August to see Bo.

In the Netherlands, we have a set of twin girls named Nivi and Elva at Dierenrijk in Nuenen. Mother is wildborn Frimas and Father is Henk, who was one of Huggies' and Victor's triplets back in 2005 in Ouwehands. Frimas and Henk had twins (Pixel and Noordje) in 2012 and another set of twin girls (Nicki and Simona) in 2015.


In Tierpark Berlin in Germany, Russian bears Tonja and Wolodja finally had a cub who survived, after two years of heartbreak. Little Hertha, named after the Berlin soccer franchise, was born on December 1, 2018. By the time Hertha was born, Father Wolodja had already moved to the Berlin Zoo, and then to Ouwehands Zoo, and finally to Rotterdam Zoo.

This is the first surviving cub at Tierpark Berlin in decades. Tonja's first cub Fritz two years ago died at the age of three months. She lost a daughter at nearly  month old last year.

Of course Berlin Zoo had Knut im 2006, but that was a different zoo, although in the same city.

Wildborn Aisaqvak gave birth to Kinuk on November 27, 2018. She is an experienced mother, having raised several cubs before.

Milak, who had been born in Aalborg Zoo in Denmark, gave birth to her first cub, a boy named Shouka December 10, 2018.

I was very happy to hear that Milak was now a mother. I watched her as a tiny newborn on dencam with her mother Victoria, and visited her many times in Aalborg as she was growing up.

The father of both Canadian cubs is Jelle, also one of Huggies and Victor's triplets.

This means that Huggies and Victor are grandparents of FIVE of the nine cubs born in zoos worldwide this year.

Too far to go to visit, but I have seen some adorable videos and photos of the twins in Novosibirsk. The mom is Gerda, and the father is Krassin. A girl Shauna and a boy Nordi. Click on the link below to see some lovely photos of the twins.

Gerda is an experienced mother, having had several cubs before. Shilka, who now lives in Japan, is much admired by her fans.  Gerda's last cub, Rostik, was sent to China, much to the dismay of those who adore him and want to keep track of him.

Borealis was born at the Toledo Zoo on December 9, 2018. His mother Crystal, who was born in Belgium, and his father Marty, born in Brookfield Zoo in Chicago, have produced seven cubs: twins Aurora and Anana, boy Siku, twins Suka (girl) and Sakari (boy), Hope and now Bo.

Marty is also the father of Nikita in the North Carolina Zoo, with Nan as the mother.

Twins Aurora and Anana, between them have produced four  cubs - Nora, Amelia Gray, and twins Nuniq (boy) and Nela, all with the late Nanuq for a father.

Thus, of the most recent 13 cubs born in the U.S. zoos, twelve are the children or grandchildren of Marty. The only other cub is six year old Luna, born to Anana in Buffalo, and Luna's father was the late Nanuq. Yes, the same Nanuq who fathered Aurora and Anana's cubs.

We do have two Alaskan orphan cubs in our zoos, but they are property of the Fish and Wildlife Service, which says they cannot be part of the breeding program, so Kali in St. Louis and Qannik in the Louisville Zoo are not eligible to contribute their genes.


Polar bears are born very unfinished, and sadly, their mortality rate in the wild and in zoos is about fifty percent. The cubs are often stillborn, or live only a few days. Quite often there are twins, or even triplets rarely, and only one might survive. Or none.  These nine cubs from this year are the ones we know of, those who survived.


Here is an interesting graphic posted at the Gelsenkirchen Zoom in Germany. It shows the number of cubs born in zoos, and those who actually survived. For example, in 2016, there were twenty cubs born, and twelve survived.


The females most likely to give birth any given season are those who have given birth in the past. Once they start having cubs, they often continue to produce little polar bears. The more years a female doesn't get pregnant, the less likely it will ever happen.

There are a small number of female bears in the U.S. who were given birth control back in the early 2000's and it seems that it became permanent.

A very unhelpful law which was passed in the U.S., maybe around 2012, does not permit bears to be brought into this country, and that includes polar bears for zoos, so there cannot be anymore trading around of polar bears until this law is repealed.

Thus the cubs that are being born in the U.S. are mostly from the same family, which will create problems down the road in finding unrelated mates for them.
Looking ahead to the next year in the U.S.


In the U.S. we only had one cub this year, precious Bo. What can we look forward to this fall?

Hopes are also high that Detroit will have a cub, as young Suka delivered this past year, but the cubs did not survive.

This coming year, maybe Cincinnati Anana will again give birth, this time to a cub fathered by Little One, whose genes are not represented anywhere else. Since this Anana has given birth to a cub before, she has a better chance than most of the female bears.

Twin sisters Aurora and Anana in Columbus have enjoyed the company of Lee this year, and since both have raised cubs, there are good chances there too.

Nan at Brookfield Zoo in Chicago, who is living with Marty's brother Hudson, is also a one time mother, who may give birth this year.

Cub are born usually in November and December, so it is almost time!

Behind the Scenes with Bo and Crystal

Crystal's seventh cub Bo was born on December 9, 2018, and spent the first few months with his mom in the small dark den behind the scenes at Arctic Edge in the Toledo Zoo, drinking lots of milk, growing at an amazing rate, getting strong.

When he was old enough to come out to play, still hidden from the public, his mom Crystal could teach him to swim in an adjustable shallow pool in a large area behind the regular enclosure out front, where dad Marty entertained the visitors.


This spacious room with no roof was his home until he made his public debut in May. There is also a hall with "bedrooms" for the bears leading off the grand courtyard like area.

I took the behind the scenes tour at the end of the day, where for a small charge ($20), you can spend some time privately spying on the bears as they munch down some fish. As it turns out, it was just me and my guide, for the other two people who had signed up for the tour were no-shows.
Crystal and Borealis, or Bo for short, were given a good supply of small fish, which they quickly gobbled up. They got some larger fish too, and there were vitamins and supplements hidden inside, so the bears were more reluctant to eat the bigger fish, my guide explained.


Finally the bears went after the bigger fish, but seemed to be trying to avoid the vitamins hidden inside.


Bo has plenty of toys to play with. My guide told me that Bo seems to prefer playing with balls more than anything else, and he had a pretty purple ball in the back.


Bo also had part of a big blue barrel to play with, and a plastic spool just like the one I remember watching his big sister Hope push around on the ice.

A few years ago I took the behind the scenes tour at the Arctic Edge, when twins Suka and Sakari were little. They had a great time playing with the fish too. On that tour, attended by a great many more people, we were shown the water tanks where the salt water is processed, a food area with a freezer to make frozen treats for the the bears, as well as a veterinary area.

I appreciate that the Toledo Zoo offers this behind the scenes tour. I am always interested in seeing the bears in a different environment and being able to ask questions.

Bo and the Lady in the Straw Hat


On my first visit to see eight month old Borealis, better known as Bo, in the Toledo Zoo, I witnessed how playful he can be with his visitors. He loves to play at the window in elevated room, where he can flirt with the ladies and tease the kids who jump up to see him. 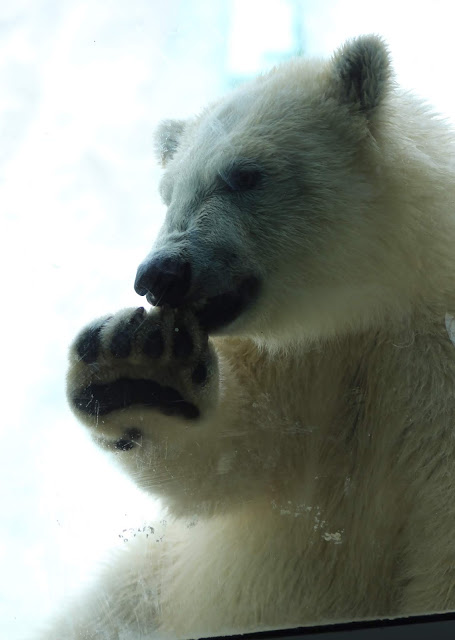 While his mom Crystal sleeps, Bo chews on his paw by the window